When You Eat Counts

When you eat counts; that is what a study showed. Specifically, patients lost more weight when they ate more calories for breakfast than for dinner.

Two studies with 1400 calories per day

The second study showed that fasting blood sugars were lower, fasting insulin levels were lower and triglyceride levels were much lower in the BF group versus the D group. This means that the BF group had a lower risk for heart attacks (lower blood triglycerides) and a lower risk to develop diabetes (lower blood sugar and lower fasting insulin levels).

What this means is that the metabolic syndrome is much better controlled in obese people when you eat a larger breakfast and smaller dinner, compared to the other way around. This shows you that when you eat counts.

Some advice on when to eat what

Eat breakfast like a king! Make it big enough that you won’t need a mid morning snack. Have high-fiber carbohydrates rather than refined carbs. For instance you could have a cup of cooked oatmeal, milk and a few nuts. Or have some avocado slices, tomato slices and a two-egg omelet. You may want to add a slice of rye bread or whole wheat bread. The dietitian, Tamara Duker Freuman, calls this type of timed eating a “circadian-synced diet.” It syncs well with the hormonal changes that take place during the course of a day.

A good way of having lunch is to fill half of your plate with vegetables; then fill the second half with grilled fish or chicken and add a small quantity of beans or quinoa (slowly digested carbs).

If lunch and dinner are more than 5 hours apart, you may want to pack a snack of about 200 calories. An apple with a tablespoon of peanut butter, a hard-boiled egg or grape tomatoes with string cheese would be examples of healthy snacks.

Dinner is low-carb. Examples are fish and a cooked vegetable or a turkey burger (without the bun) and a salad. 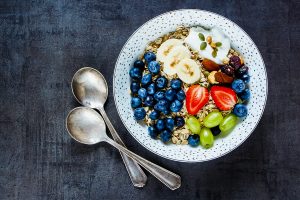 When You Eat Counts

When you eat counts; it is the timing of your meals and the calories that count. Make breakfast your biggest meal as diet-induced thermogenesis is highest in the morning and lowest in the evening. This means you burn up calories more after breakfast than after dinner. This knowledge helps those who would like to shed some pounds. But it also puts your meals right into your circadian hormone rhythm, which gives you energy all day long. A good size breakfast, a medium-sized lunch and a small dinner is the new mantra of a circadian-synced diet.