The Journal of Neuroscience reported that resveratrol helps memory and blood sugar. The researchers described a trial on 23 healthy, but overweight persons between the ages of 50 and 75. The healthcare workers gave them 200 mg of resveratrol as a supplement per day for 26 weeks. A control group of 23 subjects received an identically looking placebo for the same length of time. Functional magnetic resonance imaging (fMRI) studies of the brain and memory tests served as assessment tools for the Alzheimer’s severity. The physicians also ordered blood tests were before and after the study.

A the end of the study the resveratrol group had better word retention (measured 30 minutes after exposed to a list of words) than the placebo group. The fMRI studies showed better functional connectivity from the hippocampus (important for memory function) to other parts of the brain when compared to the controls.

Hemoglobin A1C  and leptin as markers

A marker for long-term blood sugar control, called hemoglobin A1C was reduced and leptin, which is a satiety hormone was increased when compared to the controls. Body fat content in the resveratrol group had decreased while the control group’s body fat had increased.

Resveratrol belongs into the group of polyphenols, which are powerful antioxidants. This link gives some background information about resveratrol. 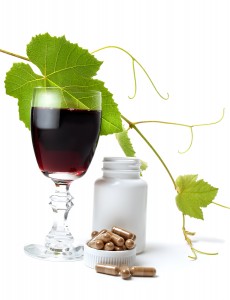 Resveratrol may be the substance in French food responsible for longevity in France. It is known to protect cells from free radicals and protects the DNA. It reduces insulin resistance, may help in prevention of cancer and helps lowering blood pressure.