Olive Oil and Other Beneficial Foods

The Mediterranean diet has long been known to include olive oil and other beneficial foods. These foods consist of lots of vegetables, fruit and fish. I has also become common knowledge that it decreases the risk of some cancers, high cholesterol, diabetes and to prevent heart attacks and strokes.

Previously noted benefits of olive oil and other beneficial foods

In a previous blog I reviewed why olive oil is healthy. In a study from Spain there were 44% less heart attacks in the group that consumed olive oil. This study lasted 13.4 years and there were comparisons to a control group that did not consume olive oil. Another Spanish study enrolled and followed  7447 persons (age range 55 to 80 years)  for 4.8 years. There were 30% less heart attacks in the experimental group in comparison to the control group on a low-fat diet.

Olive oil more stable at high temperatures than other oils

A 2018 Australian study showed that olive oil was the most stable of all the oils tested when it came to heating it. Polyunsaturated oils performed least while the best oil to cook and bake with was extra virgin olive oil, followed closely by coconut oil.

How to cook and how to bake

Based on this study it is best to get rid  all the polyunsaturated the oils from your pantry and fridge. You don’t want to use safflower oil, corn oil or soybean oil any more. All these vegetable-based oils are unsaturated oils that turn rancid at room temperature and oxidize at higher temperatures. Margarine is a product from dehydrogenated oils, which are trans fats. They have been proven to cause heart attacks and strokes. With this knowledge it is only logical to stop using any vegetables oil and margarine. Replace them with extra virgin, cold pressed olive oil, and this is all you need to do.

Use only extra virgin, cold pressed olive oil for cooking and eating

This is why the Mediterranean diet is so healthy. Use extra virgin olive oil, which is a monounsaturated oil. You can use it on salads together with vinegar or lemon juice, cook food in a pan, or bake pizza, cakes or cookies in an oven. Some people think that the taste of olive oil is “too strong”. It is true that there is a variety of taste nuances, but some olive oils have a very light taste. It gets along well with cooking and baking and does not dominate over the taste of other foods. 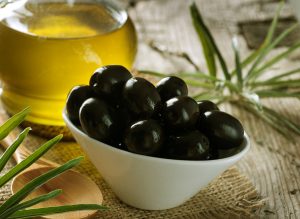 Olive Oil and Other Beneficial Foods

We have known for some time that extra virgin olive oil and other beneficial foods are a healthy way of eating and cooking. When you combine this with a Mediterranean way of cooking using lots of vegetables, fruit and fish, your life expectation goes up. The North American way of cooking using vegetable oils or margarine products leads to more heart attacks and strokes. We have a choice. Throwing out the old oils and replacing them with extra virgin olive oil is a good start. Next is to get rid of processed foods, sausages and products with refined sugar. All of this helps to reduce deaths from heart attacks and strokes.