A Norwegian study going on for 5 years showed that older adults’ exercise intensity does not reduce mortality.

For one thing, researchers stated that physical activity is important to reduce mortality in older people. On the other hand, the researchers of this study from Norway wanted to see whether there was a difference between exposing older people to low intensity or high intensity muscle exercises. To clarify, a group of supposedly inactive people served as a control. The study was published in the British Medical Journal.

1,567 participants (790 women and 777 men) enrolled in the study. Their ages ranged between 70 and 77 (mean age 72.8). They followed these subjects for 5 years. It is important to realize that 80% of them were active in exercising (medium high or high activity) before the study. In addition, 87.5% reported to be in good health. The researchers assigned 400 of the participants to two weekly high intensity continuous training sessions. They told 387 to participate in moderate intensity continuous training sessions. The rest (780 participants) were exercising on their own according to the Norwegian guidelines for physical activity.

The same was essentially true for cancer: there was no significant difference between the groups regarding cancer mortality.

We all know that exercise is good for the cardiovascular system and for lung function. In this clinical trial it appears that the control group was exceptionally healthy and they also were physically very active. This likely interfered with the outcome of the results, both in terms of mortality and diseases. The researchers admitted that the problem with the study likely was that the control group was not entirely inactive.

Other studies showing that exercise makes a difference 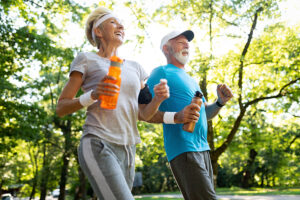 In a study from Norway medium and higher intensity exercises showed no reduction in mortality. It also did not demonstrate a reduction in cardiovascular diseases or cancer. The problem appeared that the researchers compared the experimental groups to a very fit control group. In studies of a similar design typically the control group is a sessile group that does not exercise at all. We learn from this how important the correct design of a clinical study is to obtain relevant study results.

Most studies do show that exercise reduces mortality rates

Contrary to what the Norwegian study found it does matter whether you exercise or not, particularly in older age. You can reduce your mortality by 50%. Cardiovascular disease reduces by 40% to 50% with exercise. And exercise even reduces cancer frequency, typically by 30%. Overdoing it and embarking in high intensity exercise all the time does not seem to lead to better results. But the message is clear: stay consistently active, walk, run, dance, bike, swim and keep moving. Your life depends on it!