A large meta-analysis was published in June 2016 showing that metformin lowers mortality of diabetics.

The review included data from 204 studies, namely 179 trials and 25 observational studies. There was a total lover 1.4 million subjects enrolled. Mortality from cardiovascular disease was measured either using metformin alone or sulfonylureas. It was clearly metformin that was the winner.

Metformin lowers mortality of diabetics, but so do other treatments

The World Journal of Diabetes published an overview of treatment for diabetes in Sept. 2016. First of all, it points out that physicians often use metformin as the first line drug. But one should not neglect other treatment modalities. These include paying attention to dietary changes. A low glycemic diet will help manage diabetes better. Furthermore, lifestyle changes such as regular physical exercise will improve cardiovascular fitness. Maybe, between the dietary intervention and the exercise program some weight loss would probably occur. This also helps controlling diabetes.

Very-low-calorie diet can cure 40% of diabetics

An interesting experiment from Great Britain showed that 40% of obese diabetics were cured of diabetes. They followed a very-low-calorie diet (600 to 700 calories per day) for 2 months. This was followed by a weight maintenance diet for 6 months.

The subjects of the study were overweight or obese diabetes patients. They had suffered from diabetes for 8 to 23 years.

Professor Roy Taylor, who is Professor of Medicine and Metabolism at Newcastle University, England, stated that this finding is a breakthrough. It  showed that reversal of diabetes through a strict diet is possible. As a result Professor Taylor noted further: “The study also answered the question that people often ask me – if I lose the weight and keep the weight off, will I stay free of diabetes? The simple answer is yes!” 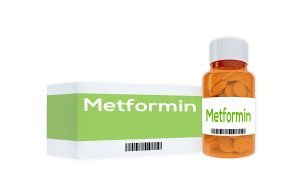 It is good to hear that metformin lowers the death rate of diabetics when used as a first-line treatment. But while metformin is effective, other factors like a low glycemic diet and a regular exercise program will also reduce mortality. Furthermore, Professor Roy Taylor in England showed that he could cure 40% of obese diabetics. These patients had to follow a very-low-calorie diet (600 to 700 calories per day) for 2 months followed by a weight maintenance diet for 6 months. Consequently, the person with diabetes definitely has options to treat. With all treatment options it is important to proceed only after consulting with your health professional.