Health Benefits From A Low-Fat Diet For Postmenopausal Women

Over a period of almost 20 years women show health benefits from a low-fat diet for postmenopausal women.

The study appeared in the Journal of Nutrition on June 8, 2019.

In the beginning of the study women were on a diet of 32% of energy or more from fat. Half of the women were receiving a low- fat diet consisting of 20 to 35% of energy coming from fats. They also consumed 5 servings of fruit and vegetables per day. In addition they ate grains as well.

The researchers analyzed the diseases of the two groups after 8.5 years. There was no significant difference in terms of breast cancer, colorectal cancer and cardiovascular disease between women on regular food intake and those on a low-fat diet.

Analysis after 19.6 years of follow-up

The researchers repeated their analysis after 19.6 years of the study. At that point the low-fat group had 16% less cases of breast cancer and 13% less cases of diabetes requiring insulin. There was 30% less heart disease in the low-fat diet group in comparison with the regular diet group.

Discussion of the results of the study

This study shows that it takes about 15 to 20 years before diseases like breast cancer, diabetes or heart attacks develop with normal fat intake. The women that were following low-fat diets with extra helpings of vegetables and fruit fared better than the controls.

These postmenopausal women were also lacking estrogen and progesterone. These hormones have a protective effect in terms of preventing heart attacks and breast cancer. This would be a contributory factor in the control group who had a regular diet with much more fat. Hormone analyses could further investigate this. The physicians could replace the missing hormones using bioidentical hormone replacement. This would have improved the survival figures even more. 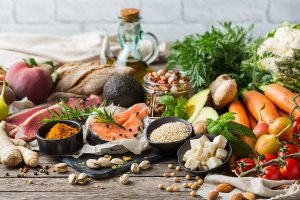 Health Benefits From A Low-Fat Diet For Postmenopausal Women

This study, which spanned almost over 20 years, compared postmenopausal women on a low-fat diet with a control group who ate normal amounts of fat. After 8.5 years into the study there was no significant difference between the groups. But at 19.6 years of the study significant differences showed up. The low-fat diet group that developed breast cancer were 15%-35% less likely to die from any cause. The low-fat diet women had 13%-25% less insulin-dependent diabetes and they were 15%-30% less likely to develop a heart attack. This study shows the effect of reducing the fat content in the diet: less breast cancer, less insulin-dependent diabetes and less heart attacks. What it did not address is the fact that these postmenopausal women are also hormone deficient (estrogen, progesterone missing). Hormone deficiency contributes to illness, and addressing this problem would have produced even more favourable results.