In the first place, a landmark study showed that fish oil reduces mortality over 16 years. Specifically, the investigation included data from 240,729 men and 180,580 women. Notably, there were 54,230 deaths among the men, and 30,882 deaths among the women.

In general, when research analyzed the nutritional intake of various subgroups, the following became evident.

Reduction of respiratory and Alzheimer’s disease

The investigators examined the effects of fish oil supplements versus the intake of fish. They found that there is a very similar result. The researchers compared intake of more than 250 mg of omega-3 fatty acids with less than 50 mg per day. The high supplement group had 13% less mortality over 16 years than the low group. For women the mortality reduction was 7%. Dr. Zhang and associates concluded that fish oil supplements or fish consumption had similar effects.  They both reduced the mortality over 16 years. Dr. Zhang stated: “The health benefit of fish is probably related to the abundant content of long-chain omega-3 polyunsaturated fatty acids, which possess anti-inflammatory properties and may prevent the development of inflammation-driven disorders, including cardiovascular disease, cancer, and Alzheimer’s disease.” 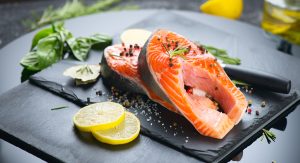 In summary, one of the landmark studies of 2018 compared the intake of fish versus the intake of fish oil capsules as a supplement. As has been noted, there was a significant drop of mortality over 16 years of the high fish-intake group. This was in comparison to the low fish-intake group. But it is important to realize that the same finding was achieved when the low fish-intake group supplemented with fish oil capsules. The researchers concluded that the: “health benefit of fish is probably related to the abundant content of long-chain omega-3 polyunsaturated fatty acids, which possess anti-inflammatory properties and may prevent the development of inflammation-driven disorders, including cardiovascular disease, cancer, and Alzheimer’s disease”.

I take a molecularly distilled triple strength omega-3 fatty acid supplement. Each enteric soft gel contains 600mg of EPA and 300mg of DHA per capsule. I take 2 capsules in the morning and 2 at night. Other studies have shown that this higher dose of omega-3 fatty acid intake may partially prevent osteoarthritis. I take this finding serious, as arthritis is common in my family.