There is now very good evidence that egg consumption increases prostate cancer risk. But apart from eggs there are other dangers, namely the consumption of red meats and even poultry. Researchers from the Harvard School of Public Health, the University of California in San Francisco carried out the study that I describe below.This research comes from the Brigham and Women’s Hospital and Harvard Medical School. The Harvard research team has recruited 27,607 healthy men in 1994 and followed them over 14 years till 2008. 199 developed lethal prostate cancer. Food questionnaires showed that men who ate more than 2.5 eggs per week had an 81% higher risk of developing lethal prostate cancer compared to the men who ate less than ½ an egg per week.

A further study by the same group found that choline content in egg yolk is responsible for a 70% increased risk of lethal prostate cancer.

The bigger story of choline and carnitine in eggs and meat

As this link shows, there is an accumulation of trimethylamineoxide (TMAO) from gut bacteria when red meat, eggs or poultry (broiled with skin) are digested.

The liver further oxidizes TMAO and it reaches the body through the general blood circulation. It causes prostate cancer, colorectal cancer, heart attacks and strokes. Egg yolks have more of an affinity of causing prostate cancer, while red meat causes colorectal cancer. Apparently choline from eggs and carnitine from red meat are structurally similar and both metabolize into TMAO. Prostate cancer was also developing in men who ate a lot of chicken, which was broiled with the skin. As a matter of fact, they had a 4-fold risk of developing prostate cancer compared to men who ate very little poultry.  The researcher thought that heterocyclic amines were the carcinogens that caused prostate cancer in these men.

With the information that choline content of egg yolk can cause prostate cancer and even promote it to the lethal stage, it is important that men avoid whole eggs and mostly eat egg white, which hardly contains any choline. I had prostate cancer in 2016. An interventional radiologist treated me with cryoablation therapy at an early stage. For me it is important to just have egg white omelettes, but discard the egg yolk. Grocery stores offer egg white also separately. I also removed red meat from my meals, because carnitine from beef metabolizes into TMAO, which is a cancer-causing chemical. I eat a lot of vegetables and seafood. Seafood with the omega-3 fatty acids is anti-inflammatory. Omega-3 fatty acids prevent cardio-vascular illness, and also helps prevent prostate cancer. 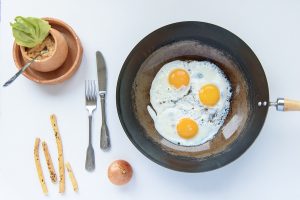 The findings by the Harvard Medical School team that choline in egg yolk can cause lethal prostate cancer is important. Just sticking to egg white, but discarding egg yolk can prevent countless cases of prostate cancer. Egg yolk is also what contains cholesterol, another risk factor, in this case for heart attacks and strokes. The researchers could show that choline metabolizes into TMAO (trimethylamineoxide) and the liver oxidizes it further. The end result is that this carcinogen causes prostate cancer. It also can cause heart attacks and strokes.

The common breakfast of bacon and eggs is very obviously nothing ”healthy”. And it may come as a surprise that the egg yolk is something to avoid. Personally, I have not missed it. Egg white omelettes are delicious and better for your health-especially if you are a male.