We heard before that eating foods high in bioflavonoids can prevent Alzheimer’s. But now a large study that went on for almost 25 years involving 75,000 participants confirmed the previous finding. Indeed, there is a review of the study by CNN. Dr. Walter Willett, professor of epidemiology and nutrition at the Harvard T.H. Chan School of Public Health stated the following. Notably, he said that damage to the blood supply of the brain contributes enormously to cognitive decline. Specifically, declines of cognitive function over a long period of time are what eventually can cause Alzheimer’s disease or dementia. For one thing,  bioflavonoids, or simply flavonoids, are powerful antioxidants that prevent damage to the small blood vessels of the brain.

More detail from the Harvard study

In this case, subjects who ate 600 mg of flavonoids per day had 20% less risk of experiencing cognitive decline. To put it another way, the researchers compared this group to a low flavonoid intake group who consumed only 150 mg per day. In the beginning of the study the majority of participants were in the 50-year age group. Now they are in their 70’s and 80’s. The participants filled in food questionnaires intermittently, from which the researchers calculated the daily flavonoid intake. Certainly, as there was a large group of participants and the observation period was very long, the statistical power of this study was highly significant. Essentially, the results meant that 1 in 5 people could avoid Alzheimer’s disease. They could achieve this simply by eating more vegetables and fruit. Eating foods high in bioflavonoids can prevent Alzheimer’s.

Fortunately, flavonoids are present in a lot of vegetables and fruit. But, if a person eats a lot of processed food and meat, your body may not get enough flavonoids to prevent you from Alzheimer’s disease. There are different types of flavonoids, like quercetin, kaempferol and myricetin that you find in vegetables like onions, hot peppers, kale, broccoli, turnips, spinach and red cabbage.

Fruit have also a lot of flavonoids in them. Blueberries, cherries, blackberries, raspberries and strawberries are rich in flavonoids. In this link there are six flavonoid types listed. By eating a variety of fruit and vegetables you will get all of them every day. This prevents cardiovascular disease, diabetes and some cancers. But it also prevents Alzheimer’s disease. The anti-inflammatory effects and the cell-protective effects that prevent oxidative damage of cells are what prevents many illnesses including Alzheimer’s disease. 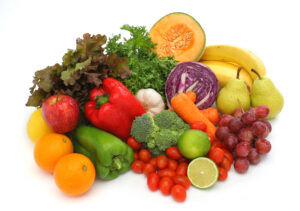 Flavonoids are nutrients that occur naturally in fruit and vegetables. They protect from cardiovascular disease, diabetes, some cancers and Alzheimer’s disease. When people’s diets are one-sided, they often eat too many processed foods, fast foods, too much meat and hardly any vegetables or fruit. Such a diet is deficient in flavonoids, and persons who have these eating habits become prone to developing the diseases just mentioned. A few adjustments like cutting out processed food, introducing fruit and vegetables and eating less meat will give you enough flavonoids to stay healthy. This includes reducing your risk of developing Alzheimer’s disease.