Notably, a new study showed that cognitive-behavioral therapy helps patients with obesity to lose weight. This was published here and is based on a publication in Frontiers in Nutrition. 43 patients were randomized to one of these 3 groups:

For one thing, in the educational health group, the quality of life improved significantly. On the other hand, the physical exercise group lost a significant amount of weight and the physical quality of life improved. However, the interdisciplinary therapy plus cognitive therapy group was more effective than the EH group and the PE group. It must be remembered that there was a measurable weight loss and body measurements confirmed weight loss as well. But additionally, there was an increase in quality of life (physically, psychologically, socially, and environmentally).  Certainly, the eating behavior of the IT + CBT group also showed that the eating behavior changed. Overall the Beck Depression Inventory documented that there was a significant reduction of depression. Details of this study were published here.

Details of the methods used in this study

In this case, to measure the degree of depression the researchers used the Beck Depression Inventory. In addition, they measured the degree of anxiety with the Beck Anxiety Inventory. Eating behavior inventory: The Dutch Eating Behavior Questionnaire served to evaluate various eating behaviors. Quality of life was assessed with a World Health Organization quality of life instrument. The researchers also took measurements of the wrist, thigh and abdominal girth circumferences.

The research team selected the participants from an Obesity Study Group of the University of São Paulo, Santos/SP, Brazil. The researchers included males and females between 30 and 50 years and a BMI of between 30 and 39.9 kg/m2. Researchers excluded participants with unstable medical conditions (depression, cardiovascular problems or lung conditions) from the clinical trial. Only 98 adults with obesity remained at the end for the studies. After 30 weeks only 43 participants remained in the study. The drop-out rates were lower for the IT + CBT group (41.9%) than for the other groups. The EH group had a drop-out rate of 63.6% and the PE group of 61.8%. The authors interpreted the 20% lower dropout rate of the IT + CBT group as proof that it was more effective.

Details about the study results

The following points are noteworthy regarding the results of this study. 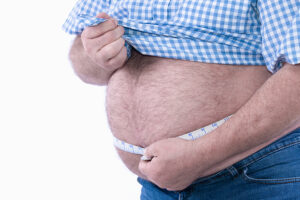 Researchers performed a study about weight loss with 98 obese adults whose BMI was between 30.0 to 39.9. After 30 weeks only 43 participants remained in the study. There were 3 groups, the education and health group (EH group), the physical exercise group (PE group) and the Interdisciplinary therapy plus cognitive behavioral therapy group (IT + CBT group). It was the latter group that was most successful in losing weight. This group found a way how to overcome emotional eating due to negative emotions like stress, depression and anxiety. This group also had 20% less drop-outs than the other groups. The secret for success with weight loss is more complex than only adding exercise to your lifestyle. You have to become aware of your emotions in order to successfully modify your eating behavior.