Being In Nature Gives You Health

According to an article in Scientific Reports (June 13, 2019) being in nature gives you health. The researchers interviewed 20,000 people in England and asked them whether they spent significant time in nature in the previous week. They found that for the beneficial effects to occur there was a threshold of 120 minutes. If people stayed less than 2 hours per week in the forest or the outdoors, there was no beneficial effect. But if they stayed more than 120 minutes in a nature setting things started to happen. The participants noticed that they experienced more relaxation, had more energy, had a feeling of “high well being” and “good health”.

The authors of the study scored those who had spent more than 120 minutes in nature and asked them whether they felt a high or low well being and whether they felt good or bad health. 23% reported a high well being. 59% felt they were in good health.

We live in a fast-paced world where we do not have a lot of contact with nature. In Japan years ago therapists introduced  “shinrin-yoku” or forest bathing. When people spent 2 to 3 hours in a natural forest setting per week, they started to feel better. The pituitary hormone, ACTH and the adrenal gland hormone cortisol mediate the stress response. Time spent in the forest can tone down the stress response, which makes us feel more relaxed.

Various authors have indicated that stress causes cardiovascular disease, obesity, diabetes, asthma hospitalization, mental distress, and it also causes increased mortality among adults. Being in an environment of nature for 2 to 3 hours will have significant healing effects.

Time when outdoor activities is effective

The authors also kept track of the hours the participants were enjoying the outdoors. The healing effect plateaued at 300 minutes (5 hours). Spending more than 300 minutes in nature did not have any benefits. Some people even reported a worsening of how they felt. Less than 120 minutes of exposure had no positive health effects.

The authors found that a high well being and feeling in good health occurred only after 120 minutes in a forest or a natural environment. There was a plateau at about 300 minutes. The authors recommend enjoying a forest or nature setting for a maximum of 200 to 300 minutes. Given these criteria, 23% of the participants reported a high well being. 59% of them reported that they felt in good health. 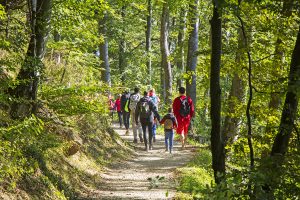 Being In Nature Gives You Health

In a study from England researchers interviewed 20,000 participants about their wellbeing and health after a stay in a forest. Spending some time in nature only had a positive effect after 120-minute exposure to nature. 23% of the participants reported a high well being. 59% of them reported that they felt in good health. The authors indicated that people who live in cities must take a break, at least on one day during the week, where they walk in a forest or enjoying a natural setting such as a park. This will rebalance what is out of balance because of the stress response, and it will restore a feeling of well-being.