The dog tapeworm is a disease where humans along with sheep or moose are the intermediate hosts where swallowed eggs from dogs and other canine animals cause painful cysts in the liver and other vital organs.

This is also known by the medical terms hydatid and alveolar hydatid disease. It is as devastating, if not more so than cystercicosis of the pork tapeworm. Two major forms are known, which have different growth patterns and are caused by two separate strains, Echinococcus granulosus and Echinococcus multilocularis. The adult form of the granulosus dog tape worm looks like shown in the link.

Many infections occur in childhood where relations to dogs are perhaps closer and less hygienical than in adulthood. Kissing a dog’s nose is particularly unsafe because eggs that are microscopically small can inadvertently be transmitted to the human and then be swallowed.

The eggs transform in the intestinal lumen into oncospheres that can penetrate the wall. They migrate via the blood stream into liver and lung tissue, where they form cysts that can stay there unnoticed for many years. Eventually there will be signs of jaundice (from bile duct obstruction), abdominal pain or fever and itchy skin rashes(=urticarial rash).

The physician will feel an enlarged, tender liver. Sometimes it will feel like a mass such as liver cancer on the surface of the liver. If a cyst forms in the lung, there can be a cough, chest pain, sudden coughing up of blood and fluid when a cyst ruptures. Rarely other organs can be affected such as lymph glands, bone or brain.

Imaging tests such as CT scans, MRI scans and ultrasonic examinations can detect the hydatid cysts of both Echinococcus granularis and multilocularis. E. granularis grows slower and consists of only one large cyst. The cysts of E. multilocularis, as the Latin name suggests, have several subdivisions that grow on their own into more cysts. The growth of these tends to be faster and the damage to the surrounding host organ is more extensive. For lung lesions chest X-rays will show the presence of the cysts. Skin tests existed in the past (Casoni test) that was not very reliable or specific. Much better blood tests are now available that utilize antibodies to a specific antigen of Echinococcus or an immunoblot technique where typical bands correspond to a specific Echinococcus strain. 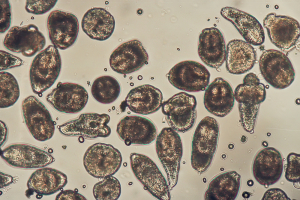 As this is a specialized area of treatment it would be wise to ask a surgeon who has experience from working in one of the endemic areas to treat the patient infected with Echinococcus.

Particularly with E. multilocularis there might only be one chance to treat the patient surgically along with drug therapy, but if any of the cysts explode during the surgery this might spread the disease to the point where it becomes systemic and behaves like a metastasizing tumor. A new technique has been developed where a percutaneous aspiration and instillation of and anti-scolex agent is done, followed by reaspiration of the fluid with killed scolices (PAIRtechnique). This works well for E. granularis where all of the scolices are in one large chamber. However, this method is more difficult in advanced cases of E. multilocularis. Only a few decades ago there was no treatment that the physician could offer. Now albendazole can be given for 28 days, which often will be successful even in cases that were considered to be inoperable in the past. This treatment is also effective in cases where a cyst ruptured spontaneously or during laparoscopic or surgical manipulation (Ref. 1, p. 1275).