Childhood rashes are common and there are traditionally the six major ones as follows: Measles, rubella, chickenpox, scarlet fever, the Fifth disease and Erythema subitum. Here are more details.

Measles is a highly contagious viral infection that had an important historical significance when the settlers came from Europe and brought this infectious disease with them into a population that had not had any exposure to it in the past. Here is an image of a child with measles.

This viral infection, also known as “German measles”, is caused by the rubella virus. It is feared because it can lead to miscarriages (=spontaneous abortions), to death of a fetus and to congenital defects in the affected fetus. Here is an image of a rubella (German measles, thanks to drhem.wordpress.com for this image) rash. 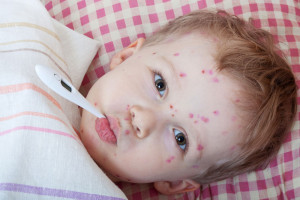 Chickenpox is an infectious illness in children where characteristic skin lesions erupt all over the body. It is due to the varicella-zoster virus that also causes shingles (=herpes zoster) in older children and adults. This virus belongs into the herpes family of viruses and is called “human herpes virus, type3”. Here is an image of a young man affected by the rash. In the beginning the rash starts with blisters, two or three days later these break open, get super-infected with skin flora and crust over. The secretions and the crusts are infective as they contain virus.

Scarlet fever has become rare in the US, but is still very common in less developed countries. It is caused by the pyrogenic toxin produced by the group A streptococcus family (Streptococcus pyogenes). This toxin causes all of the symptoms of scarlet fever including the characteristic skin rash, joint or heart disease, kidney damage or seizures. Here is an image of a child with scarlet fever .

The fifth disease is also called erythema infectiosum among physicians. It is called fifth disease as it is one of the common five childhood infections apart from measles, rubella, scarlet fever and chickenpox. It is called erythema infectiosum, Latin for “infectious rash” because it is an infection with a virus (parvovirus, type B19). It is usually faster and less disabling than all of the other childhood rashes. It is common in the age group of 5 to 7 years and is caused by mini epidemics in late winter / spring in the northern hemisphere. Incubation time is 4 to 14 days. In the beginning it presents like a cold and flu-like illness. An erythematous rash occurs in the cheeks (thanks to hardinmd.lib.uiowa.edu for these images) and a blotchy red rash appears on the extremities and trunk, but spares the soles and the palms. The lesions are maculopapular (red and raised) and flow into each other. Along with this the patient may have joint pains, which are more common in adults. The illness lasts about 5 to 10 days.

In a person with a normal immune system this is a self-limiting viral illness and no treatment is required. However, when immunodeficiency is present or in people with sickle cell anemia the viral phase of this B19 parvovirus infection can be prolonged. In pregnancy this infection, although harmless for the mother, is devastating to 50% of the offspring. Less than 10% of fetal infections lead to fetal death. Others are born with severe anemia or a condition called hydrops fetalis. In the US about 50 to 80% of adults have antibodies to parvovirus B19 meaning that they were exposed in the past and either had the fifth disease or were exposed, but did not get the rash. Women in childbearing age should stay away from any infectious child or adult. Blood tests can be done to determine whether the woman is immune. Frequent hand washing is advisable during a late winter/ spring epidemic. In some cases hyper immune globulin injections have been successfully been used.

A similar rash, called exanthema subitum (sixth disease or roseola infantum) is very similar to the fifth disease, but is caused by the human herpesvirus 6 (genus roseolavirus). This is characterized by a very high fever of 41°C (106°F). This will last 3 to 5 days and when the fever breaks a generalized rash starts on the trunk and then all over the body. The children affected are mostly in the young age group, particularly ages 6 to 12 months, and by the 2nd year about 65 to 100% show seroconversion meaning that they have been exposed to it. The only significance is the high fever that needs to be treated symptomatically with cold compresses, frequent cool baths and acetaminophen (Tylenol). Occasionally there may be seizures, meningoencephalitis (rare) or hepatitis in which case a referral to a pediatrician is needed. This viral disease is otherwise self limiting and resolves in most without any complications.