An overproduction of thyroid hormones by the thyroid gland is called “hyperthyroidism” (medically also termed “thyrotoxicosis”).

This is called secondary hyperthyroidism and can come from a pituitary adenoma, which produces TSH. The endocrinologist can do a number of tests to pinpoint the cause.

One of the earliest signs might be a multinodular goiter multinodular, which is a swelling of the thyroid gland in front of the neck, just underneath the voice box. This type of goiter produces too much thryoid hormone and the heart beats faster (tachycardia).

This is why the goiter is also called “diffuse toxic goiter“. There is a fine hand tremor, which becomes clearly apparent when the patient holds a piece of paper flat on top of the palms of the hands. The skin is moist and warm. There may suddenly be an irregular heart rhythm called “atrial fibrillation“. This needs to be treated, as it can cause blood clots and pulmonary emboli with the danger of serious complications. The patients complain of heat sensitivity and there is increased sweating and nervousness. There is increased appetite, but despite increased calorie intake there is weight loss. Due to the weight loss there is muscle weakness. The patient often feels tired, partially because of metabolic changes, partially because of the effects of sleep deprivation due to insomnia, which is another sign of hyperthyroidism. In Graves’ disease, which is a special form of hyperthyroidism with antibodies in the blood, there frequently are eye signs present. These Grave’s disease symptoms consist of eyelid retraction, which make the eye appear more protruded. In progressive cases of Graves’ disease there is also a protrusion of the socket of the eye due to pathological mucopolysaccharide incorporation into connective tissue behind the eye and the eyes get a frog like, very prominent appearance. This is called “exophthalmos“, which simply means “protruding eye”. There can also be a reddening of the conjunctiva (the white of the eye) due to increased blood vessel perfusion. With treatment these eye signs disappear. 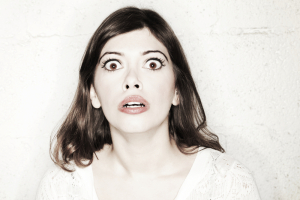 One special symptom complex is called “thyroid storm”. This is a severe form of hyperthyroidism with fever, extreme weakness, wasting of muscles and a restlessness. This can progress into a psychiatric condition with extreme emotional swings, confusion, psychosis and coma. With thyroid storm the patient may also present with a cardiovascular collapse and shock. This is a life threatening condition, a medical emergency, which needs to be treated immediately in the Emergency Room setting of a hospital. An endocrinologist or internist should attend to the patient for the best possible outcome. It is usually found in adults, who are known to be hyperthyroid, but where this condition was not treated adequately. With some other stress to the system such as an infection, diabetes out of control, a surgical procedure, or toxemia with a pregnancy, a thyroid storm can suddenly develop.

Most of the clinical diagnosis hinges on the history and the physical examination. The diagnostic tests are only used to confirm the clinical diagnosis and to rule out other associated conditions. The TSH level is very low (lower than 0.5), the T4 level is high or normal. If the free T4 level is normal, then T3 is measured, which will be elevated. In the past T3 was not as easily accessible to test, so many hyperthyroid patient with normal T4 levels were dismissed as having “normal thyroid glands”, when in fact there was an overproduction of T3!

Iodine thyroid uptake, which consists of injection of a small tracer substance with Iodine-123 intravenously and then measuring the uptake in the thyroid gland, always turns out positive in hyperthyroidism. With Graves’ disease the physician orders thyroid antibody, an additional blood test to determine whether there is antibody activity against the TSH receptor of the thyroid. There are a number of similar tests available.

Iodine use is one of the oldest forms of treatment and it is still very useful for controlling the thyroid in a thyroid storm. The endocrinologist will use it to clamp down on thyroid hormone production (both T3 and T4) literally within a matter of hours. The heart rate and an elevated blood pressure can be controlled with beta-blockers such as propranolol. Fast irregular heart beat pattern can also be controlled with calcium channel blockers.

Propylthiouracil and methimazole are two medications that are useful in controlling thyroid overproduction in Graves’ disease. Often 1/3 of these patients remain normal in their thyroid function tests after a course of 1 or 2 years with these antithyroid drugs.

The real permanent therapy is either radiotherapy with radioactive Iodine-131 or surgical treatment (called “thyroidectomy”).