In adolescence where the growth plates are still open, the bones can grow to the point where the person looks like a giant (= “gigantic”, hence the condition also has the name “gigantism”).

However, in the older teenager or in adults with closed growth plates, bones still grow, but in a different pattern. Now acromegaly (A= facial appearance, B=hand of patient above, normal hand below) presents with a more prominent chin and the mandible grows to the point where there are bite problems. The larynx cartilage enlarges and a deep husky voice develops. The ribs grow and lead to a barrel like chest. The skin grows thick and darkens. Body hair turn thick and course. The tongue becomes large and furrowed. Joint problems occur from necrotic and erosive changes that lead to premature degeneration. When the tumor gets very large visual problems including blindness can develop, but usually the the physician detects the tumor early enough so that the physician can prevent this. 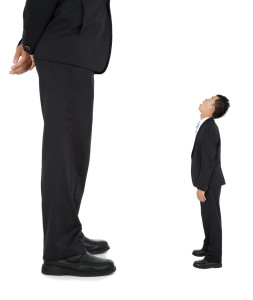 Every case is different. However, with a pituitary adenoma a neurosurgeon can do a resection of the tumor through the nose and a sinus cavity. This pituitary adenoma surgery is called the transsphenoidal resection of the pituitary adenoma. This procedure is also called transsphenoidal hypophysectomy transsphenoidal. The operative sample is sent to the pathologist for analysis, but mostly the report is a benign adenoma consisting of growth hormone producing cells. Occasionally the tumor can technically not be removed with surgery. An alternative is the radiotherapy approach where the pituitary gland is irradiated. This, however, has more potential side effects as scarring can occur in adjacent areas such as in the vital hypothalamus. It is important that the parent of the youngster and the patient discuss all the details of the therapy and the possible side effects before the treatment is given.