Psoriasis is a common scaling skin disease, which is inherited and presents with recurrent flare-ups.

It is carried by about 3% of the world population, equally shared among males and females (Ref.1, p.190). Apart from the genetic predisposition there appears to be an environmental triggering factor needed to cause a flare-up of the disease. For instance, a streptococcal pharyngitis in childhood can trigger the first attack of psoriasis.

Certain drugs such as lithium carbonate (used in manic depressive illness), beta-blockers (used as anti-hypertensive medication), anti-malarial drugs or even systemic corticosteroids (that have been used for decades in the treatment of psoriasis) have been described to cause flare-ups of psoriasis (Ref. 1, P. 192).

Finally, lack of sunshine or a particularly stressful life experience can trigger a bout of psoriasis. On the other hand, the knowledge of having to suffer from a lifelong chronic skin disease such as psoriasis often leads to a low self esteem with a tendency towards chronic depression. In the last few years further research has shown that psoriasis is associated with a cell-mediated auto-immune disease (involving T cell lymphocytes). This has opened the door for new immunological treatment modalities (see below).

The onset of psoriasis is typically slow, starting with one or only a few lesions of a plaque with silvery scaly skin cells on top and a reddish lesion underneath when the scales are scratched off.

The underlying lesion has a lot of blood vessels, which bleed easily in spots with scratching, a phenomenon called “punctate bleeding”. Here is a link to a site where pictures of psoriasis are shown: psoriasis pictures . The lesions typically are sharply demarcated, roundish, oval shaped or sometimes grotesquely shaped. By the age of 20 years about 30% of psoriasis patients have developed their first lesions. Once they develop and if left untreated, they tend to stay around for several months.

Typically the lesions will develop in certain areas such as the scalp behind the frontline of the hair and behind the ears as well as at the elbows and over the knee caps. They also tend to occur over the sacral area, the back of the thighs and over the buttock areas and on the penis. In the nails a typical appearance of pitting helps the physician in the diagnosis. Other areas of involvement are eye-brows, the anal, genital and umbilical areas as well as under the axilla. Occasionally, the whole body can be covered with psoriasis plaques and this condition can potentially be very dangerous requiring urgent admission to hospital and treatment by a dermatologist (Ref. 1, p.193-194 and Ref. 2, p. 816).

Apart from the skin, psoriasis can also involve joints and cause psoriatic arthritis. This is described under this link.

Most of the time the family doctor can diagnose psoriasis and treat this successfully. However, psoriasis can present with atypical appearances, where a referral to a dermatologist is needed for a definite diagnosis. This specialist sees many of these more complex cases and often can diagnose the condition by only looking at it. Should there be an unusual symptom constellation, a skin biopsy might be done and this can pinpoint the diagnosis. Other skin diseases such as squamous cell carcinoma, seborrheic dermatitis, syphilis, cutaneous lupus erythematosus, pityriasis rosea and other similarly looking skin diseases must be differentiated. The skin pathology shows a thickening of the keratin layer with an underlying inflammatory condition in the dermal layer. Vascular changes where capillaries go on occasion high up to underneath of the skin surface lead to a punctate bleeding (“Auspitz sign”) when the lesion is scratched. Also, there are micro-abscesses in the inflamed area of the skin lesion and the lesion is very well demarcated towards the healthy skin (Ref. 3, p. 1199). 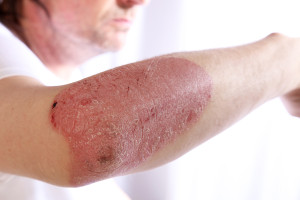 Treatment has to be an ongoing concern and the patient has to understand this.

The mainstay of therapy are various topical agents that are directly applied to the affected skin. They consist of lubricating agents (such as petrolatum ointment), anthralin (a tar product) in a concentration of between 0.1% to 1%.

Further, topical corticosteroid ointments, if there are only a few lesions, can be applied, but when larger surfaces are affected the physician needs to be aware that absorption into the systemic circulation through the skin can occur and this can have a negative effect on the hormone balance. Calcipotriol is a vitamin D derivative, which is very effective in relieving about 65% of plaque psoriasis over a time period of 5 to 6 weeks. It is very safe and can be applied up to 3 fl.oz. (100 grams) per week without worries of side-effects (Ref. 1, p. 202). Alongside this therapy the treatment can be improved with the help of ultraviolet light therapy. This is based on the observation that psoriasis patients tend to always be better in summer when people expose themselves to sunlight.

When more than 20% of the skin surface is covered with psoriasis lesions, the limit is reached with topical therapy and at this time a referral to a skin specialist is a necessity. At times intra-lesional injections of corticosteroids might be used, but at other times systemic immunomodulators have to be used to change the course of psoriasis.

As mentioned above an abnormality of the T cell immune system involving autoimmune reactions against the skin involving the TNF (=tumor necrosis factor) has opened up new therapy modalities that are still being refined by skin specialists.

Monoclonal antibody therapy involving Infliximab , directed against TNF, is very effective against psoriasis. This medication has been released by the FDA for rheumatoid arthritis and Crohn’s disease. The above link shows that dermatologists in the US have found this medication to be useful in difficult to treat psoriasis cases. Enbrel is another anti-TNF medication, which has been accepted by the FDA for psoriasis and psoriatic arthritis. Other immune modulators are alefacept and efalizumab, both of which work by inhibiting T cells. At a recent conference Dr. Y. Zhou pointed out that there likely will be further new biological therapies developed for psoriasis (Ref. 13). At the present time one of the limitations is the enormous cost of these newer medications.

Methoxsalen (brand names: Oxsoralen, 8-MOP), trioxsalen (brand name: Trisoralen) or methotrexate can be used orally under close supervision of a skin specialist. Side effects such as bone marrow suppression have to be monitored with occasional blood tests. In addition to this peeling agents such as Keralyt gel (contains 6% salicylic acid) can remove the excess skin layers down to the level of normal skin in combination with the other medications and ointments mentioned. Discuss further details with your primary care physician or your specialist.