Unfortunately there are no early symptoms of lung cancer.

We are looking for signs of different breathing patterns, such as development of wheezing or unusual noises with breathing (a croup like labored breathing or cough) that were not there before. There may be a dry cough first, then a cough with some blood or lots of blood (=hemoptysis). Smokers are usually suffering from chronic bronchitis, and they are used to wheezing, coughing and clearing their airways by coughing up mucous.

When lung cancer develops in this scenario the other symptoms mentioned above are superimposing and coughing up blood might be the first symptom that is different.

My advice in this case: See a doctor when there is a change in the usual breathing / coughing / mucous clearing pattern. Late symptoms are: fatigue, decreased activity, decreased appetite, weight loss, pain, and coughing up blood. When lung cancer has metastasized to regional lymph glands in the space between both lungs (mediastinum) pressure can be transmitted to the trachea leading to air hunger (dyspnea) or to the esophagus leading to swallowing problems (dysphagia). Also, some of the nerves can get damaged when the cancer reaches the lower neck area leading to hoarseness of the voice (recurrent laryngeal nerve paralysis). 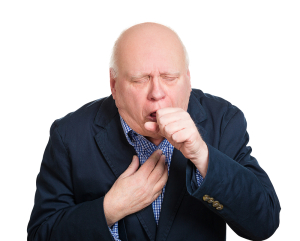 If the phrenic nerve gets compressed by metastasizing lung cancer, the diaphragm on that side will stop moving leading to severe breathing problems (phrenic nerve paralysis). Lymphatic obstruction leads to fluid accumulation around the lungs with problems moving air in and out of the lungs (pleural effusions). Spread into the heart region leads to pericardial effusions, heart arrhythmias and heart failure. Bone metastases weaken the immune system, lead to anemia and lead to a low platelet count (thrombocytopenia) with bleeding. Brain metastases, which are not uncommon, lead to a coma and death, as do liver metastases.