There are a multitude of causes of lung cancer.

The most common cause of lung cancer is from smoking cigarettes, smoking cigar or smoking pipe. About 65,000 men and 27,000 women die every year in the U.S. from cigarette smoking. The use of self hypnosis, possibly in combination with Nicoderm or Nicorette, could safe many of these lives. Asbestos dust exposure in the past was also an important cause of causing lung cancer.

The asbestos fiber is taken in by the lungs and causes a chronic inflammation, which can degenerate after many years into lung cancer.This type of cancer accounts only for 3% of all lung cancers (malignant mesothelioma).

Inorganic arsenic leads to lung cancer as well as skin and liver cancer. It is of concern in mining or smelters, pesticide manufacturing and handling, the use of “alternative” arsenic medication and contamination of drinking water in some rural mining towns. Exposure to fumes with chromium compounds, Bis(chloromethyl)ether or mustard gas as can be found in certain manufacturing, also leads to a higher incidence of lung cancer. Nickel dust exposure used in the refining industry will cause cancer of the sinuses and lungs. Polycyclic aromatic hydrocarbons are used in the coal processing industry and cause lung and skin cancer. Recently there was a longterm study released that showed that miners exposed to diesel exhaust fumes (thanks to scienceblog.cancerresearchuk.org for this link) are having much higher lung cancer rates than the average population when studied over 20 years. I find this very concerning. The study warns that any city population exposed to exhausts from trucks run by diesel have a higher risk for lung cancer than a rural population that is less exposed. Exposure to vehicle exhaust fumes as a cause of lung cancer  in taxi drivers had been studied before in Denmark. They found that there was a lag time of about 10 years that it took for lung cancer to be initiated by exposure to exhaust fumes.

Radon is a naturally occurring inert gas. It is a decay product of uranium-238. Radon is decaying further and emits radiation, which acts on the lining of the lung and can cause radiation induced cancer. Radon is present in soil and rocks and can seep into homes and office buildings. This can become a problem in air-tight homes where air circulation is restricted. Radon concentration can be measured easily by a health office using a radon-meter (data pooled from Ref. 1, 2 and 3). 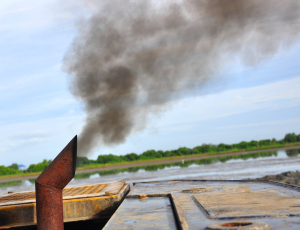 There appear to be several mechanisms of rendering the carcinogens of cigarette smoke even more carcinogenic. There are several detoxifying liver enzymes that nature modified spontaneously in some families around the globe. When people with a defect of an enzyme system in the liver, which metabolizes a tobacco-specific N-nitrosamine, get exposed to cigarette smoke, they manufacture an even more powerful carcinogen. This way they have an eight-fold higher risk to develop lung cancer than a normal person who is exposed to cigarette smoke.

This defect is inherited in a recessive manner. A genetic defect in the glutathione – S – transferases, a liver enzyme system normally diminishing the carcinogenic effect of polycyclic aromatic hydrocarbons of cigarette smoke, leads to a higher vulnerability of the person with the genetic defect to carcinogens. This genetic defect is inherited in an autosomal dominant fashion and makes the bearer much more vulnerable to environmental pollution, cigarette smoke or exposure to carcinogenic gases(=polycyclic aromatic hydrocarbons) in industry (Ref. 1 and 2).

Carotenoids(from carrots), vitamin C and vitamin E trap free radicals and reactive oxygen molecules. Selenium is a trace mineral, which is a component of antioxidant enzymes. All these supplements, which are normally contained in a well balanced diet, play an important role in scavenging free radicals from tobacco smoke, solvents and pollutants. There may be more nutrients, which play a role in detoxifying carcinogens and protect the body from lung cancer every day, but research is complicated by differences in statistical methods, conflicting results and different cancer incidences around the world. Increased fat intake and obesity also have lead to an increase of lung cancer. One-sided diets with too much fat could predispose that person to lung cancer (Ref. 1 and 2).