In the late 1960’s hematologists detected that arabinoside-C (ara-C), a chemotherapy medication, converted a previously incurable acute myelogenous leukemia in adults (AML) into a disease that would suddenly respond to other chemotherapeutic agents.

Since then various combinations of chemotherapy have been tested in large trials throughout the world. They all include ara-C now. Remission can be achieved with an induction chemotherapy by combining ara-C and daunorubicin or a similar combination. About 70 to 80% of AML patients in the age group of 60 to 65 will respond to this therapy. Those patients who do not respond to this therapy usually die from infection or hemorrhage.

Older age (older than 65) has a poorer prognosis because the function of liver and kidney is compromised more and the cardiovascular system is already partially affected on account of the older age. There is a 2 to 3 week window following the beginning of the chemotherapy treatment, where the leukemia patient is particularly vulnerable to the chemotherapy side effects in addition to the weakened state in general. There are various forms of post remission therapies, but there is no consensus how long this should be given (about up to one year usually). Following that a “consolidation therapy” is given, a kind of pulsed therapy as the usual maintenance therapy, which works for other forms of leukemia, seems to lead to dangerously low white blood cell counts and platelet counts. These in turn lead to bleeding and infections with a lot of deadly outcomes. The most popular post-remission program consists of one or two courses of a regimen including high-dose ara-C in an attempt to wipe out any residual AML. 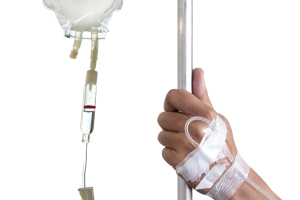 Hematologists recommend at the time of the second remission that a bone marrow transplant from a close relative be given. This seems to lead to a 10% higher survival rate at the 5 year point and also cuts the relapse rate of AML significantly. This means there is less time spent in hospitals and physicians’ offices.

The following cure rates (at 5 years) were achieved at the M.D. Anderson Cancer Center between 1980 to 1990 (see Ref.1 and Ref.2) for acute myelogenous leukemia:

After 10 years the following survival figures were obtained in the same study.