There are three major forms of acute adult leukemia. They are called acute lymphocytic leukemia (ALL), acute myelogenous leukemia (AML) and acute undifferentiated leukemia (AUL). AML is 5 times more common than ALL and AUL is less common than ALL. The distribution of %-ages differs somewhat from region to region.

The cause of acute adult leukemia is similar as stated above for childhood leukemias and much about it is still unknown. Secondary leukemia due to a longterm chemotherapy side effect is more common in adults than in children. Exposure to industrial poisons (benzene e.g.) or exposure to ionizing radiation are more common in adults. Also there are certain regions such as Japan or the Caribbean where a certain leukemia virus (human T-cell leukemia virus) causes a special type of leukemia. This is the only known human virus that is known to cause leukemia apart from the Epstein-Barr virus, which is known to cause Burkitt’s lymphoma in Africa.

Secondary leukemia:  Chemotherapy regimens may save some lives in many cancers such as leukemias, Hodgkin’s lymphoma, myelomas, lymphomas, ovarian cancer and breast cancer. However, one of the side-effects can be AML, which is the common type that develops in such situations. The peak time when such secondary leukemia develops is between 4 and 5 years after the original cancer has been treated with chemotherapy, but fortunately only about 5 to  10% of patients will have the misfortune to have this happen to them. This subgroup of AML have more resistant leukemia cells as they have additional chromosome abnormalities on top of the ones which are typical for leukemia. This translates into difficulties with treatment regimens and much lower cure rates than the cure rates for primary leukemia.

The symptoms of acute leukemia are non specific fatigue and malaise. The degree of anemia, which originates from a replacement of precursor red blood cells in the bone marrow, will determine the degree of fatigue. Most of the patients will have had leukemia for less than 3 months(only about 25% for more than that) when fatigue is pronounced. Air hunger and rapid breathing, infections and bleeding are common symptoms. Minor colds and flu-like symptoms are common. Persisting fever without any obvious cause is found frequently. Bleeding into the skin as pin like dots(“petechiae“) or in form of larger areas of the skin (“multiple echymoses”) are found more commonly in AML.

The degree of this bleeding is directly linked to the loss of platelets, the blood cells responsible for blood clotting. This occurs as the leukemia cells accumulate in the bone marrow suppressing the precursors of the platelets there.

Other symptoms can be gum infection and throat infection. The physician might notice more subtle infections around the anal area or in the soft tissues. In ALL liver enlargement and spleen enlargement as well as lymph gland swelling tell the physician that the diagnosis likely is leukemia. In AML and AUL these signs may not be as prominent. The final diagnosis is always made after extensive tests. Some more peculiar initial presentation can be a strange skin rash, particularly in AML where skin infiltration with leukemia cells is more common. Chest bone pain (sternum pain) happens in about 50% of leukemia patients. 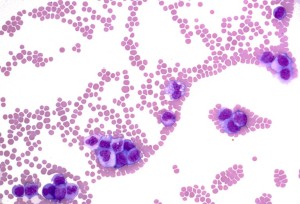 As mentioned before, a meticulous work-up with further tests is necessary to evaluate the patient. This will initially involve blood tests and when there are gross abnormalities such as the constellation of high white blood cell count, low platelet count and low red blood cell count (anemia), a bone marrow aspirate and bone marrow biopsy has to be done by a hematologist or internist. This material is then carefully prepared with specific stains and viewed under the microscope by a pathologist specialized in leukemia (cyto- and histopathologist). Most of the leukemias can be clearly diagnosed this way. However, on some occasions the pathologist needs to do further histological tests utilizing the electron microscope, further cytochemical tests or immunological classification utilizing monoclonal antibodies. It would be too overwhelming for the reader to go into more detail about these tests or genetic tests that occasionally are also used.

The purpose of all this testing is to ensure the following:

However, there are more rare subgroups of acute adult leukemia , which are not included here that need specialized treatments. For this reason it is extremely important to do these tests initially in a systematic manner.

Another reason to do tests is to rule out other causes that may mimic leukemia. Physicians call this differential diagnosis. It is good medical practice as in other clinical situations, to rule out other disease, which could present with similar clinical features. For instance, tuberculosis, systemic lupus, anemia due to folic acid deficiency or vitamin B12 deficiency are known to mimic the bone marrow smear from a bone aspirate. However, a bone biopsy analyzed with the special staining procedures mentioned above will differentiate each of these causes.

Finally there is a need to monitor the major body functions throughout treatment with ongoing blood tests. For instance, the high cell turnover of the rapidly dividing leukemia cells lead to elevated uric acid, which is hard on the kidneys. An elevated blood uric acid level needs to be brought down with allopurinol, a medication, which will ensure more uric acid secretion into the urine. This will prevent the formation of kidney stones when the chemotherapy treatment is started, as this in turn will lead to tumor cell breakdown and uric acid increase in the blood. Another detoxification organ is the liver. Liver function blood tests are done initially on during chemotherapy to ensure that there is no deterioration and if there has been an initial abnormality, that this hopefully will normalize with the treatment regimen. This is particularly important in the case of infiltration of the liver by leukemia, as mentioned above more commonly found in ALL.

When all the tests are done which classify the type of acute leukemia and tell the physician what stage it is in, the treatment can begin. I will describe treatment in general terms and then provide a few more details and prognostic features for each subtype.

Treatment of AML and ALL involves remission induction and post-remission therapy as outlined above under childhood leukemias. There are a few differences as mentioned below. Although there has been a major breakthrough in the survival rate since the introduction of the combined chemotherapy regimens in the 1970’s as explained under childhood ALL above, progress in the 1980’s regarding leukemia survival rates for adult leukemia patients has been somewhat disappointing. However, there are a number of factors for this, which are being further researched. One key observation is that with adult leukemias the prognosis is poorest the older the person is at the time of diagnosis.

This has lead researchers to interesting observations where differences could be found of the group that does poorly when compared to the group that fares better. There are differences in the mechanism of cell division, but also in the frequency of chromosome abnormalities, chromosome breaks or and the absence of certain proteins that seem to suppress the development of leukemia. These factors likely explain why the leukemia prognosis for adults is poorer than for children. Such research will eventually lead to much improved cures. Also, as the immune system ages, it is likely that this also will be a powerful contributor to the worse prognosis in older people. I will now describe some details regarding the three acute adult leukemias ALL, AML and AUL.