Diagnostic tests for esophageal cancer are discussed in the following. Because of the difficulties swallowing (dysphagia) the doctor will likely order a barium swallow and at the same time a chest X-ray to look for abnormalities in the chest cavity.

An X-ray picture of the esophagus is called “esophagogram“, which shows very characteristic changes in the case of esophageal cancer. During a thorough physical examination the physician looks for clues of any metastatic spread in other parts of the body.

This guides the physician to decide what other tests to order. Because cancer can only be definitely diagnosed through a tissue sample, an esophagoscopy has to be arranged next where the gastroenterologist looks through a flexible fiberoptic instrument into the esophagus and takes several small tissue samples (biopsies) that are sent to a pathologist for a histological diagnosis. 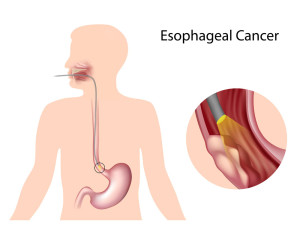 At the same time this procedure will tell the specialist how widespread the tumor is. In Asia a technique called “abrasive cytology” is used more often than esophagoscopy in the U.S.. It is used there as a screening method. A special catheter with a balloon is swallowed deflated and then pulled up partially inflated. The sampled cells are sent to the pathologist like they would for a Pap test in cervical cancer.

When the diagnosis of esophageal cancer has been made from the biopsy material, the question is whether the cancer is local or whether it has invaded locally or even metastasized into other organs. If coughing is a symptom the physician may want to consult with a respirologist to do a lung bronchoscopy to look for invasion into the bronchial or tracheal wall. A CT scan of the mediastinum (the space between the lungs) will detect any abnormal lymph glands from metastatic esophageal cancer tissue there. Even invasion of the tumor into the aortic wall can be seen this way. In patients with bone pain a bone scan would be ordered.