This difference is 17-fold for mortality among comparable populations based on geographic location alone. The U.S. is one of the countries with the lowest occurrence rates, but at the other end of the spectrum are Iran, Switzerland and France. The highest mortality rates from esophageal cancer are found in China, Singapore and Puerto Rico.

As can be seen from the table below, esophageal cancer has a high mortality (=death) rate because the death rate per year is almost reaching the amount of new cases per year. In other words, there is a very poor cure rate for esophageal cancer.

Occurrence and death rates of esophageal cancer in the U.S.

these figures indicate a high death rate for esophageal cancer

This is a reflection of the fact already mentioned above that esophageal cancer tends to metastasize early via the blood stream and via lymphatic pathways. By the time the patient has symptoms and the physician diagnoses the esophageal cancer, it is too late: the cancer has already spread and is often a stage III or IV (see below) at the time of diagnosis.

Another peculiarity is that esophageal cancer is 3-fold more common in black persons within the U.S. when compared to whites (the figures quoted above are for whites). At the present time we do not know whether this is due to genetic differences, due to life style choices or a combination of both.

People above the age of 60 are more prone to getting esophageal cancer as this link points out.

Alcohol consumption as well as cigarette smoking have been linked to the development of esophageal cancers. The higher the concentration of alcohol (like in hard liquor), the higher the risk for cancer development.

About 3% of esophageal cancers arise from scar tissue in the esophagus from prior caustic injuries from accidental or suicidal swallowing of lye. It often takes 40 years between injury and the occurrence of cancer. In about 0.5 % of patients with esophageal diverticula, pouches that often are there from birth, esophageal cancer can develop. 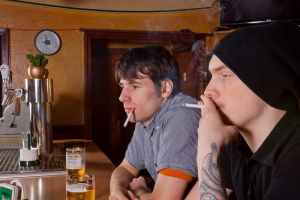 With exposure to cigarette smoke a phenomenon can occur where a second cancer develops in the same region such as a head and neck cancer (1/3 of he time associated with esophageal cancer), throat or bronchial cancer. This phenomenon is called “field cancerization” (Ref. 1).

In a condition called “achalasia” the nerve supply in the lower esophagus is malfunctioning and this leads to impaired motility and relaxation of the esophagus with resulting swallowing problems and regurgitation of food. This condition typically starts between the ages of 20 and 40. As many as 20% of patients eventually develop esophageal cancer.

Another high risk setting are patients with reflux esophagitis, where acid from the stomach irritates the lining of the lower esophagus and this can lead to a condition called Barrett’s esophagus. This is a premalignant condition where further chronic irritation through acid reflux can lead to a type of esophageal cancer, called adenocarcinoma. 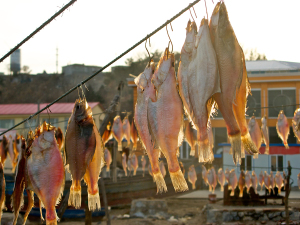 There are a number of very rare genetic conditions such as the Plummer-Vinson syndrome where esophageal webs are found in the upper esophagus and this is associated with iron deficiency, brittle fingernails and an enlarged spleen. These patients are predominantly female and are at a higher risk for developing esophageal cancer.

Finally, there are many chemicals that can cause cancer apart from the carcinogens of cigarette or pipe smoke and the toxic effects of alcohol. Several reports have pointed out since the late 1960’s that curing agents for meat and sausages and certain cheeses, such as sodium nitrites and sodium nitrates will be changed in the stomach into nitrosamines, which get absorbed, metabolized in the liver and then excreted by the kidneys. These nitrosamines are powerful carcinogens that will lead to cancer of the esophagus, stomach, liver, kidneys and bladder, in other words whatever tissue they get in contact with. Other carcinogens such as cigarette smoke will potentiate this cancer producing effect (Ref. 3). Beside these factors the author points out that moldy foods, certain rare plant carcinogens and dietary deficiencies can also lead to esophageal cancer.

Have you checked your food labels lately? Look for nitrites and nitrates in sausages, ham, turkey breast, meat and cheeses. You may have to ask your deli-clerk to show you the label on the big package before they slice it for you. Many manufacturers are aware that nitrates and nitrites are carcinogenic as they are metabolized into nitrosamines, powerful cancer producing chemicals. Manufacturers often do not include it in the product label. Others are oblivious to the medical literature on this topic, possibly because of lobby groups. If you cannot find a brand that does not contain nitrites or nitrates as preservative, then you would be better off to cook your own meat and slice it.Your health is at stake!