Staging Of Cancer Of The Uterus

In the first place the physician must do staging of the cancer of the uterus first before embarking on any cancer treatment. This is like with all the other cancers, where we saw how important it is to complete all the above mentioned tests first prior to treatment. When these tests are complete,  the physician can individualize treatment according to the stage the cancer is in for the best long-term results.

Sometimes a woman may be irate with the specialist as the diagnosis may already be known from the histology of the dilatation and curettage (uterine cancer), but the cancer stage has yet to be determined. The specialist needs to explain to the woman that depending on what stage is found the treatment can be radically different and this is the reason why there is no room for short-cuts.

Staging in the past

In the past, particularly with uterine cancer the work-up was not that thorough often neglecting to look for possible pelvic metastases. As a result a simple hysterectomy was done leaving pelvic or paraaortic lymph glands untreated. Of course, this led to very disappointing survival data. With proper investigation this would never have happened. Cancer is very unforgiving and there is no room for errors.

The revised FIGO staging (1988, slightly modified in 2000) is what is used in the major Cancer Clinics throughout the U.S.:

IVA:  invasion of bladder or bowel

Apart from the stage of the tumor, which is determined by the depth of invasion and the spread into neighboring structures, the patient’s survival also depends on what histological type the tumor is. This is called the “grade” of the tumor. It determines how aggressive the growth pattern will be.

Many different investigators from the U.S. and elsewhere have found that groups of women with uterine cancer divide usually into about 40% with grade 1, 40% with grade 2 and 20% with grade 3 disease. This has practical implications as particularly grade 3 tumors, which consist of rapidly dividing immature cancer cells, tend to metastasize early into lymph glands of the pelvis or into the paraaortic lymph nodes. The physician will therefore take particular care to look for hidden metastases in order to develop a treatment plan that is appropriate for this patient (Ref.1, page 1197). Radiotherapy will be included in these cases to cover for pelvic and paraaortic lymph gland metastases. 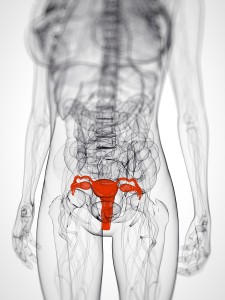 Staging Of Cancer Of The Uterus

The lining of the uterus (called “endometrium” by doctors) goes through similar cell changes in the development of cancer, as is the case in cervical cancer, where I described this process in detail.

The equivalent for “dysplasia” in cancer of the cervix would be called “atypical adenomatous hyperplasia” in uterine cancer. I would not want you to remember that, but understand the principal that there are warning signs that tell the gynecologist, when an endometrial biopsy is done, that this type of change will go on to develop into uterine cancer. Since the early 1990’s endometrial biopsies have become a more common procedure and this can significantly determine the risk for uterine cancer development down the road (see below).

Metastases of cancer of the uterus

From here metastases can reach any organ. Inside the abdomen the cancer cells shed into the peritoneal cavity from either the fallopian tube, an invasion through the uterus or through an ovarian metastasis. The cells can also migrate through lymphatic migration channels (described in more detail in the ovarian cancer chapter) into the liver, the right lung or into retroperitoneal lymph glands.

There is another channel for metastases to migrate through and this is along the round ligaments (a uterine ligamentous support to the front of the lower abdominal wall) and through lymphatic connections to the thigh lymph nodes (called” femoral nodes”). If there are lumps under the skin of the upper front thigh region in a woman with uterine cancer, this is a sign of a very poor survival rate.