Symptoms Of Cancer Of The Uterus

In general, the earliest  symptoms of cancer of the uterus in women with this condition are abnormal vaginal bleeding patterns. About 3/4 of women who develop uterine cancer are postmenopausal. Certainly, this makes it relatively easy to detect cancer of the uterus as women in menopause normally have no menstrual periods. However, any abnormal bleeding has to be taken seriously. To be sure, the doctor needs to check this out in an attempt to detect the cancer early. In particular, some women observe the abnormal bleeding as if it were “an irregular period”. Notably, they hope that somehow it would normalize itself. In the meantime the cancer is invading deeper. This makes it so much more difficult to treat it effectively at a later time.

At the same time the vaginal discharge may only be serosanguinous in nature (not frank blood). Specifically, if the cancer grows towards the cervical canal, there may be a narrowing (“cervical stenosis”) that prevents the blood from flowing out.  In fact, sometimes the contents of blood inside the uterus can get infected as well (called”pyometria”). 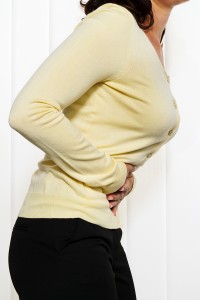 Symptoms Of Cancer Of The Uterus (Pelvic Pain)

In this case the patient would have a fever and pelvic pain. By all means, ultrasonography would show the condition and a referral to a gynecologist would initiate further investigations and treatments.