There may not be any symptoms of osteoporosis in the beginning; then suddenly there is an ankle fracture, wrist fracture, compression fracture of the spine or hip fracture. Typically the pain may be worse with weight bearing than in a resting positions (such as lying down). If there are compression fractures in the lower back, they typically occur from the 8th thoracic spine vertebral body downwards, but rarely higher up.

If there is a compression fracture higher than the 8th thoracic spine vertebral body, there should be a high suspicion for a possible cancer causing this. 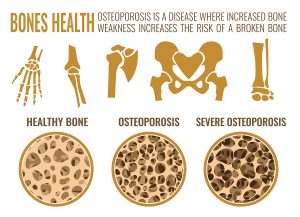 Typically a compression fracture leads to a localized pain at the fracture site. The pain would be most severe for about one week, but then often lingers on for another 3 months or longer. With a series of compression fractures in the lower thoracic spine and lumbar spine, the spine appears to be forward bent permanently, which is called a “kyphosis”.

Apart from compression fractures lung and heart problems can occur

It is another sign that osteoporosis likely is the reason behind this. Commonly this can be seen in the aged population, particularly when bio-identical hormone replacement was not done. There is bone loss, and bone pain is typically associated with this. However, it can occur in postmenopausal women who were on HRT with estrogen and Provera. As mentioned above, the osteoporosis with multiple thoracic spine compression fractures can be so pronounced that lower end of the front rib cage is rubbing on the upper rim of the pelvic bone. With kyphosis there can be breathing problems. Often there is also a higher incidence of pneumonia in the lung bases because of poor lung expansion.

In addition the heart reserve is used up to a considerable extent and this puts the kyphotic patient at a higher risk for a heart attack. There might be other symptoms in the case of a secondary osteoporosis. The symptoms of the underlying disease would be present as well as the symptoms described above.