Which Cheese is the healthiest?

Recently a CNN article asked which cheese is the healthiest? Two nutritionists commented on various cheeses and why some are healthier than others. When it comes to the quality of cheese it is important to be aware of the amino acid content, keep the fat content as low as possible and avoid cheeses with overprocessing. Also, cheese is an important source of calcium. Of all the cheeses the ones with less salt content are most valuable. This is particularly important for patients who tend to get high blood pressure. Cheese consumption should be an addition to other healthy foods like vegetables or whole grains. Don’t make cheese a meal of its own. You would consume too much fat and salt, which is bad for your blood pressure and your arteries.

Two registered dieticians, Castro Mortillaro and Emily Martorano, recommend ricotta cheese as a very nutritious cheese choice. Regular ricotta has 10% fat content, but the leaner form comes with only 7% milk fat. Ricotta has a lot of whey content, which is a milk protein that the body can easily digest.

Hard cheese can have problems

Parmigiano, pecorino or gouda are hard cheeses that come with recommendation to consume them only in moderation. Due to the fact that they contain less water, they have a higher calcium and sodium content than softer ones. Castro Mortillaro said: “If you’re hypertensive, or you really need to control your sodium intake, or maybe you have renal issues, then probably going for a softer cheese would be better.”

Both Castro Mortillaro and Emily Martorano work as dietitians for the NYU Langone weight management program.

The winner cheeses for weight loss are light Swiss cheese, light cheddar cheese and ricotta. According to Martorano you need a 1:10 ratio of protein to calories. She explained this further as follows: “For every 100 calories, there should be at least 10 grams of protein — that will tell you if it’s a good source of protein and in turn a healthier cheese”.

You need to avoid these cheeses

Highly processed cheeses contain much less protein, more fat and more salt. I remember as a teenager in Germany that I ate lots of Velveeta. The US Food and Drug Administration does not classify these cheeses as “cheeses”, but as “pasteurized processed cheese foods” or “pasteurized process cheese products”. Fresh cheese is best. Some cheeses like feta, goat cheese and cheese made from raw or unpasteurized milk contain probiotics. Feta is mostly cured in salt brine, which makes it more problematical. Goat cheeses are very good, but they tend to be more expensive.

Think of cheese as a flavoring agent, rather than as a meal of itself. Both dieticians agreed about this. Martorano said: “Instead of using cheese as the main source of nutrients, it really is a side. If we’re pairing that cheese with something else — a vegetable, a whole grain — that’s what’s going to make it more of a satisfying, filling meal”. 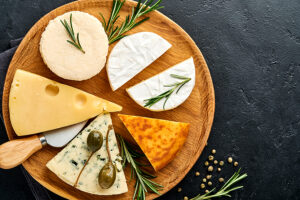 Cheese can be a valuable adjunct to your food intake. It provides extra calcium, protein and saturated fat. However, there are healthy cheeses and unhealthy cheeses. Avoid highly processed cheeses like Velveeta, processed cheese slices and others. They contain much less protein, more fat and more salt than is healthy. Ricotta cheese is a very nutritious cheese choice. It has a lot of protein in it, not too much salt and it is one of the lowest fat containing cheeses. When you are on a weight loss program, a light Swiss cheese, light cheddar cheese or ricotta is your best choice. Cheese is a side dish. Think of cheese as a flavoring agent, not a meal of itself. Eat it with a vegetable or a piece of whole grain bread. This way you can enjoy it, but you will not gain weight when you consume cheese.