At a research conference in Savannah, Georgia in September 2015 a presentation was given about the use of vitamin C supplementation in a group of overweight and obese patients. Postdoctoral research fellow Caitlin Dow, PhD and colleagues from the University of Colorado compared the effects of taking 500mg timed-release vitamin C to regular walking without a vitamin C supplement on endothelin production from the lining of the arteries. The vascular lining (the endothelial cells) produce a 21 amino acid peptide, called endothelin (ET-1), which is balanced by nitric oxide. Endothelin constricts blood vessels, while nitric oxide relaxes it.

The research involved 35 sedentary, overweight or obese individuals and their blood was tested for endothelin-1 while they took sustained release vitamin C for 3 months. The control group was a similar group of overweight or obese people who were willing for a 3 months period to exercise by following a regular walking program without taking vitamin C.

The researchers found that a 3-month supplementation by the sedentary overweight or obese patients had the same ET-1 reducing effect as doing the walking program without taking vitamin C.

In a sense it is good news that overweight or obese patients had a favorable response to vitamin C, but it does not mean that they should sit back and do no exercise. They could start a walking program or alternatively start a swimming program and still take vitamin C. The other group who only exercised should also start taking vitamin C, as they would get the benefit of both exercise and vitamin C in reducing blood pressure and postponing hardening of arteries. 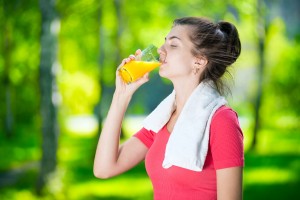 This study is useful, because vitamin C is easy to take and has other beneficial effects as an antioxidant. Up to this point it was not known that it also has mild antihypertensive properties, which helps in terms of preventing heart attacks and strokes. Eat your vegetables and fruit, but also add a 500mg sustained release vitamin C tablet per day and you will be better off than without it.