The Plague, Not A Thing Of The Past

Every couple of months we hear about local outbreaks of the plague, usually far away, but at times in the Western USA. There are also reports of experiments in the military of North Korea and in the past in Iraq of biological weapons (aerosols with live cultures of Yersinia pestis), which would instantly lead to the pulmonary plague. Madagascar is one of the areas in the world where the bubonic and pulmonary plague are relatively common. In late 2013 there was an outbreak in Madagascar with 84 cases of the plague and 42 deaths as this news article reports.

Rodents invading homes and feeding on stored rice bring with them plague infested fleas that bite humans and transfer the plague bacillus Yersinia pestis causing the “black death” in humans. On average there are about 300 to 600 cases of the plague per year in Madagascar.

In an online publication on Sept. 17, 2015 it was announced that eleven Yersinia pestis strains have been DNA sequenced.

This is good news for a possible future cure, which may be different from the traditional approach in treating with antibiotics. Lately several plague strains have emerged that are resistant to the standard antibiotics, so a new approach in the future would be welcome news.

The plague continues to be a reportable disease and is closely monitored by the WHO. Although resistant cases have been reported, none of them has ever led to a pandemic as isolation practices and other pest control measures have been effective.

In this context it is important to note that only in July 2015 a research paper reported that a new group of antibiotics, the arylomycins are effective against resistant strains of the plague. 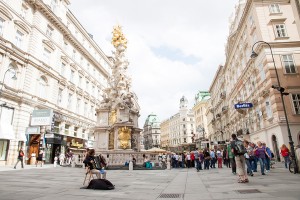 The Plague, Not A Thing Of The Past

The image above depicts the plague column in Vienna that was erected in downtown Vienna in 1679 when the last plague epidemic was over. It was due to a lack of hygienics and invading rats in a trade area. It is important to control the rat population, particularly in larger cities. Cats and dogs need to be checked for fleas and if present they need flea collars and treatment against fleas. Neglecting this, they may introduce plague contaminated fleas from ground squirrels and other rodents to humans. Fleabites with fleas that carry Yersinia pestis will cause the bubonic plague. When you notice a swollen, painful lymph gland in the groin or neck immediately go to the nearest hospital for diagnosis and treatment. Every hour wasted can increase mortality.

Unfortunately there is also the ugly specter of bioterrorism that comes up with this disease. A crop duster that carries live Yersinia pestis and distributes this over an area could cause pulmonary plague cases. The key in this scenario is to stay inside and listen to the news and instructions from authorities regarding this emergency. We can only hope that we will be spared from negative news like that.

More information about the plague.

Link regarding the Covid-19 coronavirus.