The End Of The Coconut Oil Hype

Professor Dr. Karin Michels from the Freiburg University, Germany recently announced the end of the coconut oil hype.  In her lecture she went one step further and said that coconut oil is a poison and will lead to heart attacks, if consumed regularly. The statement indicates that coconut oil has 92% of saturated fatty acids. Consumption of these fatty acids increases the LDL cholesterol level. Coconut oil consists of 48% lauric acid. Lauric acid is a middle chain fatty acid. Researchers have shown that it increases HDL cholesterol. But Professor Michels said that this is deceiving. Many experiments used 100% middle chain fatty acids (lauric acid) instead of whole coconut oil. This led to wrong conclusions about the effects of coconut oil, which raises LDL cholesterol and causes heart attacks.

Improving the looks of your skin and hair

Coconut oil is protecting the skin against damage, heals and gives it a healthy and youthful appearance. Researchers observed in Polynesians that applying coconut oil protected them from sun exposure.  Coconut oil protected them from sunburns and their skin remained youthful looking into an older age without the development of precancerous or cancerous skin conditions. They are also consuming some coconut oil and put it onto their skin as a lotion. Coconut oil helps for extremely dry skin. At the same time it prevents bacterial, viral and fungal infections. All of this applies to external use of coconut oil but has nothing to do with internal use as a food source.

External use of coconut oil

Even hair can be treated with coconut oil. Dr. Fife quotes a New York hair stylist Amanda George who said: “I massage two teaspoons of warm coconut oil into my hair before bed, then wash it out in the morning.” Dr. Fife: “Her hair is luxuriant, soft and shimmering” (Ref. 1, p.135). You should not expect miracles, but you can give it a try! 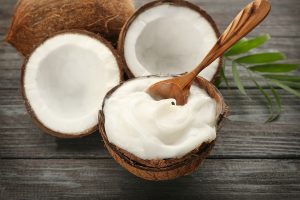 The End Of The Coconut Oil Hype

There is a lack of studies supporting that coconut oil is a healthy “super food”. The opposite seems to be true: there are too many saturated fatty acids in coconut oil putting you at risk to develop a heart attack. Externally there seem to be advantages of coconut oil in cosmetic products. Use virgin cold-pressed olive oil rather than coconut oil as a fat source in your food. There are ample studies showing reduced heart attack rates with olive oil use in cooking.