Supplements Do not Help for Heart Health

People often want to use supplements for their heart, but a new study showed that certain supplements do not help for heart health. The CNN article is based on the original research published in the Journal of the American College of Cardiology on Nov. 5, 2020. 190 volunteers in the age group of 40 to 75 were given various supplements for 28 days. These consisted of low-dose rosuvastatin, placebo, fish oil, cinnamon, garlic, turmeric, plant sterols or red yeast rice. Only the 5mg rosuvastatin group showed a significant reduction of the low-density lipoprotein cholesterol by 35.2%. All the other supplements failed to lower LDL cholesterol.

Discussion regarding “supplements do not help for heart health”

The set-up of the clinical trial is rather simplistic. The study did not address the quality of food intake.

A Sept. 2014 study in humans showed that higher polyphenol olive oil as found in extra virgin olive oil caused an increase in the more effective HDL2 particles, which cleans out plaque from arteries more efficiently than the regular, cheaper olive oil. You should use mainly olive oil for your regular cooking. Cold pressed, virgin olive oil is more expensive than the regular olive oil, but this is what has been proven to enhance health and to prolong life, if you consume it regularly.

Preventing inflammation of the arteries

Preventing inflammation of the arteries: at the moment many people eat the standard North American diet consisting of foods with too much sugar, processed foods with animal fat and lots of pasta. People need to eat a lot of leafy-green vegetables (kale, spinach, Swiss chard) and lean pork, turkey and chicken. This will change the omega-3 to omega-6 ratio in favor of omega-3 fatty acids. This has a powerful effect on your body, as the surplus omega-3 fatty acids will suppress any inflammation in your blood vessels. This prevents heart attacks. 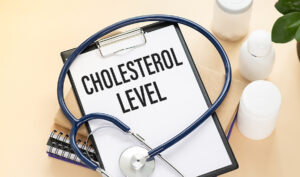 Supplements Do not Help for Heart Health

An interesting study on 190 volunteers showed that only the statin group lowered LDL cholesterol. The authors gave 5mg of rosuvastatin daily, which reduced LDL cholesterol by 35.2%. All the other supplements (placebo, fish oil, cinnamon, garlic, turmeric, plant sterols or red yeast rice) were ineffective. But the authors did not mention that dietary changes can have a profound effect on lowering LDL cholesterol. Cutting out refined sugar and adding 125 mg of tocotrienol daily will significantly lower both LDL cholesterol and triglycerides. Switching your diet to a Mediterranean diet consisting of legumes, vegetables, fruit, fish, chicken or turkey meat lowers cholesterol compared to the Standard American diet. Add extra virgin olive oil to your food on a regular basis and your LDL cholesterol also will be lower