Physicians at the University of Illinois Hospital & Health Sciences System (UI Health) have done a pilot study involving 12 patients with sickle cell disease that were cured.

So far this inherited disease has been considered to be incurable. But a stem cell transplantation from healthy, tissue-matched siblings has changed all of that.

Sickle cell anemia is common in people of African descent. One in every 500 African Americans born in the U.S are afflicted by this form of anemia, where many blood cells have a sickle like appearance. These misshapen red blood cells cannot deliver as much oxygen into the tissues, which causes severe pains and also is leading to strokes and organ damage.

Now with this new bone marrow treatment the following steps are pursued:

In all 13 patients the transplanted red blood cell stem cells populated the sickle cell patients’ bone marrow where they started producing normal, non-deformed red blood cells. One patient did not follow the immune surveillance protocol and the original sickle cell condition came back. The other 12 patients were followed for 1 year and did very well. Their hemoglobin concentration in the blood was normal and they had improved cardiovascular function. They had less pain from a lack of oxygen in their blood cells, and their health and vitality has improved. 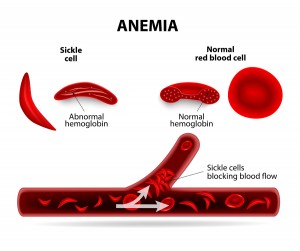 It seems that this new treatment protocol will be the treatment of the future for inherited sickle cell anemia. Dr. Rondelli said: “Adults with sickle cell disease can be cured without chemotherapy – the main barrier that has stood in the way for them for so long. Our data provide more support that this therapy is safe and effective and prevents patients from living shortened lives, condemned to pain and progressive complications.”

More info about sickle cell anemia in this page of nethealthbook.com: https://nethealthbook.com/anemia/anemia-due-hemolysis-click-link/hemoglobinopathies-2/sickle-cell-anemia/