Details about the study

The authors of the study selected 14 meat items and 6 processed meat items. They traced bilateral meat trade flow across 154 countries. The researchers integrated meat consumption and trade patterns of meat. They developed a risk factor assessment tool for non-communicable diseases. They also found that a country that imported large quantities of red or processed meats showed abrupt increases of non-communicable diseases. The researchers noted significantly increased meat import statistics between 1993 and 2018 for the Caribbean Islands and Oceania. Parallel to this observation the statistics showed an increase in non-communicable diseases and increased mortality figures. The investigators also noted very similar findings in Northern and Eastern Europe. Increased meat imports correlated strongly with increased death rates and disability scores.

Impact of red and processed meat

The World Health Organization stated that red meat is a probable cause of colorectal cancer, pancreatic cancer and prostate cancer. With respect to processed meat the WHO noted that it is a group 1 carcinogen for humans causing colorectal cancer.

Other diseases like heart disease, diabetes and premature death occur as well from the consumption of red meat and processed meat. Dr. Hu, one of the main investigators said about red meat consumption: “The evidence shows that people with a relatively low intake have lower health risks. A general recommendation is that people should consume no more than two to three servings per week.”

Some key observations of the study

The global disability-adjusted life years (DALYs) increased by 89.9% within 25 years. In the same time frame there were 10,898 deaths, an increase of 74.6%, which according to the investigators were due to the increased consumption from imported meat products. This shows what impact the consumption of imported meat has on a population. In this context researchers observed that small island populations were particularly vulnerable to the effects of increased meat consumption. The Bahamas, Tonga, Antigua and Barbuda, the Seychelles, and Singapore are examples where imported red and processed meat skyrocketed and non-communicable diseases and deaths from diet-related diseases increased as well. Too much meat consumption causes heart attacks, strokes, diabetes and various cancers. 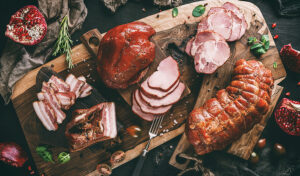 In a November 2021 publication of the British Medical Journal a strong association was evident between meat export into a country and consumption of meat by its citizens. Unfortunately, researchers also found direct consequences of overconsumption of red meat and meat products. People develop heart attacks, strokes, diabetes and various cancers. People are healthier when they consume more vegetables and fruit and cut down on their meat consumption.