It is important to realize that an important study showed that pollution increases mortality in older people. This US study from Boston, MA used 16 years of data, 68.5 million Medicare enrollees (65 years or older) and 570 million observations. Notably, it showed that the reduction of the present air quality standard of 12.5 to 10 micrograms of particles per cubic meter would save 143,257 lives. This is an important observation. Certainly, many asthmatics and people with chronic obstructive pulmonary disease (from cigarette smoking) would benefit from this enormously. The researchers collected the data between 2000 and 2016.

Each patient had a unique identifier. Specifically, the patient’s zip code determined where the patient lived. For one thing, data from 3 different sources provided chemical composition of the air in the zip code area where the patient lived. Using this data, the researchers could establish pollution values for a grid of 1 square kilometers for all of the US. The researchers calculated the exposure to pollution for every patient over a period of 16 years. Significantly, several statistical approaches yielded the same result. For every 10 microgram/cubic meter decrease of particulate matter of less than 2.5 micrometers there was a 6% to 7% reduced mortality rate over one decade. In other words, 143,257 lives would be saved in 10 years because of reduced exposure to pollution. Another key point, the researchers were able to exclude confounding bias. Indeed, they concluded that their studies proved causation, not just association.

The authors of this study concluded that long-term exposure to particulate matter of 2.5 micrometers or less caused mortality. They pointed out that they had a massive study population of 68.5 million Medicare patients. They did numerous sensitivity studies. And they went through an exhaustive analysis of covariant factors. There were no assumptions in the study, just straight observations. The conclusion remained that reduced exposure to small particle pollution reduced mortality.

There are different size particles in polluted air. The smaller the particles (less than 2.5 micrometers in diameter) the worse for lung tissue.

The smaller particles enter the lungs deeper and lead to constriction of the small bronchioles. This is particularly important for people with asthma and chronic obstructive pulmonary disease (COPD).They react to any airway irritant with prolonged bronchoconstriction. 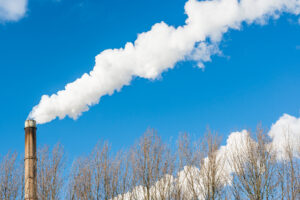 Air pollution increases mortality in older people. This likely is from irritation of the small airways, which can also lead to infection of the lungs. A US study from Boston, MA used 16 years of data, 68.5 million Medicare enrollees (65 years or older) and 570 million observations to study mortality. They found that the reduction of the present air quality standard of 12.5 to 10 micrograms of particles per cubic meter would save 143,257 lives over 10 years. The key to saving lives from lung diseases is to reduce air pollution.