A team of researchers came across a peculiar finding, namely that overtime work and baldness are related. After Mexico South Korea has one of the longest working hours. Previous studies have shown that weight gain, fatigue, injuries, and musculoskeletal diseases are a direct result of working long hours. The Department of Occupational and Environmental Medicine, University School of Medicine, Seoul, Korea released a new study. They examined workers in a large company who worked less than 40 hours per week, another group that worked 40 to 52 hours per week and also a group with more than 52 work hours per week. They found that workers that worked more than 52 hours per week had a higher rate of baldness than the workers who worked less than 40 hours per week.

The workers working less than 40 hours per week served as the base rate.

The researchers found the following figures:

Initially the study population consisted of 43,383 males aged 20 to 59 years. They had participated in a thorough health examination both in 2013 and 2017. Many participants had incomplete questionnaires so that at the end only 13,391 subjects could be included in the analysis.

But the most consistent finding with regard to developing baldness was the amount of work hours per week.

Discussion of the findings

The authors of the South Korean study mentioned that the causes of baldness are usually as follows: genetic factors, stress, disbalance of male hormones, infection, other hormonal disbalances, blood circulation disorders, nutritional deficiencies, and drug use. But up to now length of work hours has not been cited as a cause of baldness in males. Prolonged work hours may be an indirect indicator of exposure to higher stress.

There is a circumscriptive form of hair loss, called alopecia areata, where stress has led to antibodies attacking hair follicles.

Some males are more prone to develop baldness because of genetic factors in the family. It is DHT (dihydrotestosterone), which shows higher levels.

But stress is also leading to more follicular atrophy, which can lead to baldness. 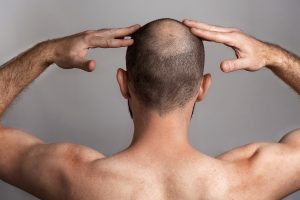 A large study from Korea has established that stress from long working hours can cause baldness in men. There are other factors of baldness including genetic baldness. However, stress from long work hours on top of a genetic disposition can finally lead to permanent hair loss. The authors suggested that workers should be allowed to work less than 40 hours per week.