A British study came out on April 12, 2018 showing that nocturnal workers fare poorly. Researchers followed almost half a million adults in the UK for 6-½ years. In the beginning of the study the participants were asked whether they were “definite evening types” or “definite morning types”. There were two other categories: “more of a morning person than evening person” and “more of an evening than a morning person”. In the beginning of the study there were 433,268 participants.

Causes of death among the night owls

10,000 people died during the 6-½ years of the study. The causes of death were mainly in the night owl population. These were the ones who went to bed late and woke up late. The other 3 groups did not have higher than normal mortalities. What did the night owls die of? They died mainly from psychological illnesses, diabetes, neurological disorders, gastrointestinal disorders and respiratory disorders.

There were some limitations regarding ethnicity, as 97% of the participants were Caucasians. They were either of English or Irish decent. We do not know whether these findings would also hold true in African people, Hispanic people or Asians.

I have previously reviewed other studies that show that night owls are at a higher risk of turning sick. http://www.askdrray.com/health-risks-of-night-shifts/ For instance, in a South Korean study anti-inflammatory markers were higher, and heart attacks were more common in night owls. White-collar workers in a Swedish study who worked night shifts had a 2.6-fold higher mortality than controls of daytime workers. A Chinese study showed a 2.03-fold higher risk of nighttime workers to develop cancer, who had worked in that shift for 20 years. A Danish study revealed that night shift nurses had a higher risk of developing diabetes than nurses who worked only daytime. Daytime cortisol levels were higher than normal, which in turn lowers melatonin levels.

During the day it is cortisol that keeps us awake. These two hormones inhibit each other, cortisol inhibits melatonin and melatonin inhibits cortisol. All the other hormones are also regulated according to the diurnal rhythm: testosterone is highest in the morning, human growth hormone is highest between midnight and 3 AM etc. Night owls disturb this hormone order. If you work nighttime shifts, your hormones have to adapt. This is very similar to traveling east or west where you cross several time zones. Your internal diurnal hormone system has to adjust to these changes. Typically it takes 1 day to adjust to a 1-hour time zone difference. 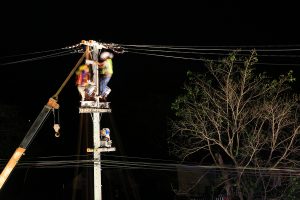 Shift work or nightshift work is interfering with the diurnal hormone rhythm. This leads to low melatonin levels and sleep disturbances. But it also leads to psychological illnesses, diabetes, neurological disorders, gastrointestinal disorders, respiratory disorders and even cancer.

The underlying problem seems to be a disturbance of the diurnal hormone rhythm. Normally this regulates our waking/sleeping pattern and keeps us healthy. But with nighttime work melatonin production weakens, cortisol production is higher, and hormone rejuvenation during rest periods suffers greatly. This weakens the immune system, allows cancer to develop and leads to chronic inflammation causing cardiovascular disease and diabetes. The remedy to prevent this from happening is to catch little naps whenever you can during the day and, if at all possible, work daytime shifts permanently.