Researchers at Tübingen University, Germany have found a new antibiotic lugdunin against resistant bugs as the BBC reported. This report is based on a scientific publication published on the previous day.

The researchers analyzed the natural bacteria in the hair of people’s nostrils. A significant number grew Staphylococcus lugdunensis. When this bug grew in their nostril hair the pathogenic strain Staph. aureus was always absent. Staphylococcus lugdunensis strains produce lugdunin, a new thiazolidine-containing cyclic peptide antibiotic. It is this new antibiotic that is responsible for fighting Staph. aureus.

How the new antibiotic lugdunin against resistant bugs was found

The Tübingen University researchers detected this new class of antibiotics because of some fortunate circumstances. They had the idea that natural bacteria that colonize the body’s surface may produce something that fights other pathogenic bacteria. This is the story about the discovery of lugdunin. As a result of this discovery the authors think that the natural bacteria that colonize the skin and hair will be a treasure box for years to come. They think that other antibiotics will be produced by observing what protects the body from invasion by pathological bacteria. There are more than 1000 such surface bacteria that live on our skin and in our hair quietly doing their work of protecting us.

Streptococcus pyogenes has mutated to produce the feared MRSA bug. This is the antibiotic resistant cause of flesh-eating disease. But the new antibiotic lugdunin against resistant bugs is also effective against this problem bug, which is a huge discovery!

The German researchers found that 30% of people carry the pathogenic Staph. aureus in their noses. But when the rival bug Staphylococcus lugdunensis is present in the nose swabs, these patients are less likely to be carriers of Staph. aureus.

Tests on mice showed that lugdunin could treat superbug infections on the skin of mice. This included Staph. aureus and Enterococcus infections.

When men with beards were compared to men without beards the following results came up. Facial skin had colonies of potentially pathogenic Staph. aureus in shaved men versus bearded men. Bacterial swabs in bearded men did not show these pathogenic bacteria. 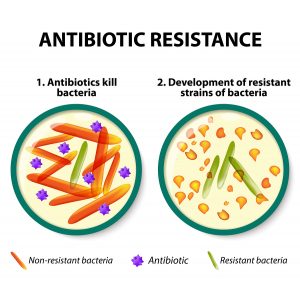