A clinical trial on patients in Korea showed that metformin reduced cancer risk in type 2 diabetics. Previous research found that patients with diabetes are more prone to develop various cancers. Researchers thought that this was due to insulin resistance, insulin-like growth factors and high insulin levels.

Data were from The Korean National Diabetes Program, which was a prospective, multicenter cohort study in Korea. It lasted from 2006 to 2016. The average follow-up period was 5.8 years. Out of a total of 1918 subjects there were 164 who developed cancer. Research adjusted the data for fasting blood sugar, insulin resistance, blood pressure, triglycerides and LDL and HDL cholesterol. Researchers noted that patients on metformin had 50% less cancer rates than controls that were not on metformin. This is obvious in this graph.

More details about the study

More details about the study is available here.

Metformin is in use as one of the most common treatments for diabetes. Several authors have pointed out that those who were on metformin therapy also had a much-reduced probability of coming down with various cancers. It is no surprise that the present study found this as well. This study was better controlled, and was carefully analyzed to just show the effect of metformin alone without interference of other parameters.

Metformin is also one of the drugs that has the propensity to prolong lives in those who take it as anti-aging drug . Other drugs are rapamycin, which is in use in transplant patients against organ rejection. Both rapamycin and metformin seem to stimulate an anti-aging gene. 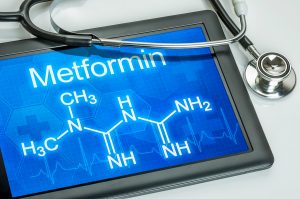 A study from Korea showed after 5.8 years that patients who were taking metformin for their diabetes also prevented cancer. Researchers noted that patients on metformin had 50% less cancer rates than controls that were not on metformin. The investigators believe that metformin reduces insulin levels and insulin resistance, which cuts down on cancer initiation and cancer progression. The end results are lower cancer rates in the treatment group with metformin. Future trials need to define the mechanism of action further. There may also be other drugs with fewer side effects that could take the place of metformin, and further research will be necessary.