A study investigating a group of Midwestern firefighters came to the conclusion that a Mediterranean diet benefits US workers. The diet consisted of lots of fruit, vegetables, nuts, fish, olive oil and whole grain.

780 male firefighters aged 18 or older were questioned about how well they adhered to a Mediterranean type diet. Physical examination records and blood tests used for this study were supplied by fire department medical examinations. Diet scores were developed that determined the adherence to the Mediterranean diet with a high score meaning good compliance and a low score meaning that less valuable foods were also consumed. 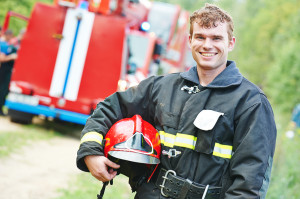 The group with the highest diet score had a 43% lower risk of weight gain over the 5 prior years. Compared to the fire fighters with a lower diet score there was a 35% lower risk of developing metabolic syndrome. Metabolic syndrome is a condition where a number of risk factors are clustered together like abdominal obesity, high blood pressure, high fasting blood sugars and lipid disorders. These can lead to diabetes and heart attacks resulting in premature deaths.

The group with the highest diet scores also had a lower body fat percentage, a greater high-density lipoprotein (HDL) level and a lower low-density lipoprotein (LDL) resulting in a lower risk for heart attacks and strokes. After adjustment for age, physical activity and body mass index there was a linear relationship between lipid subfractions and adherence to the Mediterranean diet. The group with the better compliance showed a lower LDL cholesterol and a higher HDL cholesterol. LDL cholesterol causes hardening of the arteries while HDL cholesterol protects from it. Stefanos Kales, the lead author of this study from Harvard Medical School stated that this type of Mediterranean diet shows health benefits in a group of non-Mediterranean workers and would “justify future intervention studies”. In other words, it would be justified to intervene in the poor food habit/obesity cycle by introducing the same type of diet that has shown benefits with firefighters into other population groups including children.

More information is available at Nutrition

Lack of B vitamins in children predicts obesity: https://nethealthbook.com/news/lack-b-vitamins-children-predicts-obesity/