The fact that you can have a longer life with a Mediterranean diet is known for some time. But now a study has shown that the reason for a longer life is the fact that telomeres get elongated from the Mediterranean diet. Telomeres are the caps at the end of chromosomes, and they get shorter with each cell division. This is the normal aging process.

The finding of elongated telomeres comes from the ongoing Nurses’ Health Study that started enrolling subjects in 1976. At that time 121 700 nurses from 11states enrolled in the study. In 1980 diet sheets were used to determine who was adhering to a Mediterranean diet. 4676 middle-aged participants were identified to qualify for this study. This diet consists of a combination of vegetables, legumes, fruits, nuts, grains and olive oil. Fish and lean meats were also consumed. The control group followed a regular diet. Between 1989 and 1990 blood tests were obtained to measure telomere length in white blood cells. It is known that smoking, stress and inflammation shortens telomeres. The lead author Marta Crous-Bou stated that overall healthy eating was associated with longer telomeres compared. But the strongest association was found in women who adhered to the Mediterranean diet when compared to the controls. For the best diet adherence score there was a 4.5 year longer life expectancy due to slowed telomere shortening. 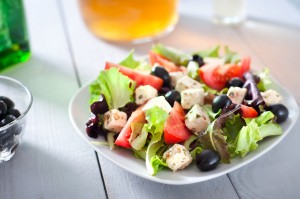 Longer telomeres have been found to be associated with the lowest risk to develop chronic diseases and the highest probability of an increased life span. I have reviewed the importance of lifestyle factors in a recent blog where I pointed out that Dr. Chang found a whole host of factors that can elongate telomeres by stimulating telomerase. It has been shown in humans that increased physical activity elongated telomeres. So did vitamin C, E and vitamin D3 supplementation, resveratrol, a Mediterranean diet and marine omega-3 fatty acid supplementation. In addition higher fiber intake, bioidentical estrogen and progesterone replacement in aging women and testosterone in aging men, as well as relaxation techniques like yoga and meditation are also elongating telomeres.