They all had impaired glucose tolerance and were overweight in the beginning of the study. However, they did not have diabetes at that time. 96 of them developed type 2 diabetes within 5 years. 104 of them did not develop diabetes over the full 15 years of the study.

Metabolic profile of the test populations

Researchers examined and analyzed several metabolites . One of them turned out to be very relevant. This was indolepropionic acid, a by-product of gut bacteria. It was high in the group of 104 participants, but low in the 96 participants who developed diabetes. The authors also noted that a diet rich in fiber and whole grains increased indolepropionic acid. At the same time insulin production from the beta cells of the pancreas also showed an increase.

The authors concluded that high fiber intake could help gut bacteria to produce indolepropionic acid, which in turn prevents diabetes. 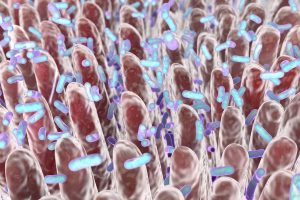 The Finnish Diabetes Prevention Study has resulted in two important observations on patients. Firstly, it showed that diabetic patients had a deficiency in indolepropionic acid, while those who did not turn diabetic had a high level of indolepropionic acid. Secondly, it showed that fiber and whole grain intake increased the indolepropionic acid levels. It also showed that insulin production was higher in the group of participants who did not turn diabetic. This was the case despite the fact that they were overweight. But the difference between the two groups was a higher fiber intake in the non-diabetic group. So, gut bacteria may prevent type 2 diabetes.

We can learn from this that a lower weight and higher fibre intake protect against diabetes. But we need to add that regular exercise is also a tool to prevent diabetes. Finally, avoiding sugar and sugary products is also known to help prevent diabetes.