The first was prostaglandin E2, an indicator for inflammation. The second was thromboxane B2, which is produced in platelets. This is part of the clotting system and can cause blood vessels to constrict. The third substance was leukotriene B4. This can make arteries leak and activate other inflammatory substances. All in all these markers served to indicate whether something was happening when fish oil was used.

The subjects who were at high risk for getting heart attacks showed a significant reduction of thromboxane B2. Leukotriene B4 was also reduced in the presence of fish oil in high-risk patients. The leukotriene B4 marker was only reduced after 14 weeks or more of taking fish oil supplementation regularly.

The investigators concluded that fish oil lowers inflammation. It is a very useful supplementation to reduce the risk factors for blood clotting and heart attacks in high-risk heart patients.

A study from the Brigham and Women’s Hospital, Boston, MA in August 2016 showed that high dose fish oil lowers inflammation after a heart attack. This reduced the infarct size by 5.8% and the non-infarct heart fibrosis by 5.6% compared to a placebo group. There were 180 patients in the treatment group and 178 patients in the placebo group. The trial lasted for 6 months. Serum markers of systemic and vascular inflammation were also significantly reduced. Side effects were not noted with the high dose fish oil therapy.

The active ingredients in fish oil are EPA (Eicosapentaenoic acid, commonly known as omega-3 fatty acid), DHA (Docosahexaenoic acid) and other fatty acids. Any of these more potent fish oil preparations are molecularly distilled. This means that mercury, cadmium and PBA impurities have been removed from the product before it is passed on to consumers. 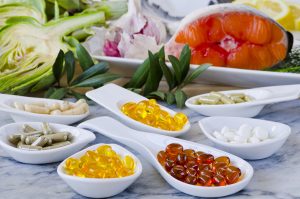 These two studies show that known risk factors for heart attacks (prostaglandin E2, thromboxane B2 and leukotriene B4) could be lowered through fish oil supplementation. The second study also showed that once a person has experienced a heart attack, it is not too late to supplement with high dosages of fish oil to reduce the infarct size from the heart attack and minimize the associated scar formation.