Even Small Amounts Of Processed Meat Pose A Risk

A recent study showed that even small amounts of processed meat pose a risk to develop colorectal cancer.

The researchers published the study on April 17, 2019.

In 2005 the National Cancer Institute published a large study where 478,040 men and women from 10 European countries were examined according to their consumption of red meat, processed meat, fish and chicken intake in relation to the development of colorectal cancer.

Red meat eaters with the highest consumption had 35% more colorectal cancers than those who consumed the lowest amounts. Persons who consumed fish had 30% less cancer and poultry consumers were neutral in terms of new colorectal cancer cases over 10 years. This is one of the 400 studies that was reviewed by the WHO and led to the recommendation in October of 2015 that red meat and sausages (processed red meat) would be carcinogenic.

Discussion of these results

It is no longer a matter of discussing whether these results regarding red meat and red meat products are true. They have been confirmed with hundreds of studies. The two studies from April 2019 and 2005 are particularly relevant, because they involve more than 900,000 people collectively. The larger a study is, the more reliable are the statistical results.

The question now is what to do with these results. Personally, I have cut out the consumption of sausages over 30 years ago and stopped eating red meat following the WHO announcement in October of 2015.

I come from a family where my mother died of colon cancer. This means I have a threefold risk compared to a person who does not have the genetic risk. I also have a colonoscopy every three years to remove any colonic polyps that the gastroenterologist finds. A person without the genetic risk should have a colonoscopy every 8 years from age 45 to 50 onward. If you have a problem cutting out red meat and sausages, at least do your health a favor and eat less of it. Eat more fish, as this is a protective factor. Eat more fiber, because this also helps to prevent colorectal cancer. If you are a heavy drinker, drink less or cut out drinking of alcohol. 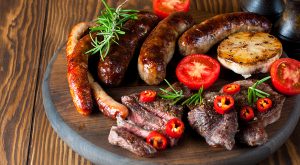 Even Small Amounts Of Processed Meat Pose A Risk

A large new study has reconfirmed older studies that showed that even small amounts of processed meat pose a risk to develop colorectal cancer. Eat more fish, more fiber from breakfast cereal and consume less alcohol. This will all help to reduce the risk of colorectal cancer. But most of all you need to cut out red meat and red meat products like sausages. If you are unable to do that, cut down on the amounts of these red meat products that you consume. On top of that do not forget to have a colonoscopy done by the time you are 45 to 50 years, as described above, and have this test repeated depending on your risk level.