Even though elephants have much larger bodies than humans, elephants hold the secret to lower cancer rates. I have previously reported that elephants have 20 genes of the p53 gene that suppresses cancer compared to humans who only have one copy per cell. Elephants have a cancer rate of 5% in a lifetime, while the human lifetime cancer rate is between 11% and 25%.

P53 and LIF6 work together to suppress cancer rates

Now two independent research groups detected more relevant findings. Researchers from the University of Chicago and from the University of Utah in Salt Lake City found a zombie gene. It is called LIF gene. This stands for “leukemia inhibitory factor”. There are several subtypes. LIF6 is the critical gene, called leukemia inhibitory factor pseudogene. It has a function that leads to the absorption of mitochondria, so cells with DNA damage cannot develop into cancer. This is the secret why elephants have less cancer rates than man. Despite there being so many more cells present in their bodies, cancer is rare in elephants. The combination of having 20-fold more p53 genes in each cell is the first factor. The second factor are the LIF6 genes, which receive stimulation by the p53 genes to get rid of defective cells. This is the secret behind the much lower cancer rate in elephants.

More detailed description of how cancer is suppressed in elephants

The fact that elephants have many more cells than humans, but less cancer rates was termed “Peto’s paradox”. Richard Peto was a statistical epidemiologist from Oxford University. He noticed that the incidence of cancer did not correlate with the number of cells in an organism. In an elephant damaged DNA which has damages will activate the p53 gene, which in turn will cause the production of TP53, a protein that activates LIF6. Next this will target the mitochondria of the problem cell which has cell damage and lead to apoptosis. Apoptosis means “cell death”. The body has built-in mechanisms to kill dysfunctional cells or cells that have the potential to turn cancerous. In humans this mechanism also exists, but compared to elephants it is considerably weaker. This likely is the reason why more cancers develop in humans than in elephants.

Here is a review of the p53 gene in humans. Things in humans are not as simple as in elephants. We do know that malfunctioning p53 genes have a connection to cancer development. We also know that DNA breaks activate the p53 gene. The tumor necrosis factor has some function regarding apoptosis. But the mechanism of cell apoptosis is not as stringent as the one described in elephants. There we had multiples of the p53 genes activating LIF6 causing apoptosis. Obviously differences between elephants and humans also exist on a sub-cellular level. 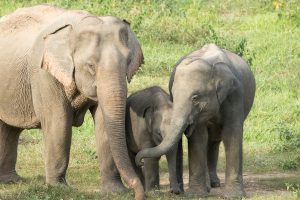 Elephants have 20-times more p53 genes in every cell compared to humans who only have one copy. This explains why elephants have less cancer. Part of that mystery is that there is leukemia inhibitory factor gene (LIF6) that is activated by damaged DNA and further activated by p53. This destroys mitochondria in a cell with damaged DNA. Apoptosis of cells with damaged DNA causes cell death, which means no cancer will develop. In humans apoptosis is not that clearly defined, another reason why we get more cancer. Cancer research still has a long way to go before we get practical results in terms of cancer therapy. But elephants have taught researchers a lot on that pathway. With this knowledge genetic research will be necessary to find ways to stimulate cell death in humans when cells have DNA damage. It will very likely decrease cancer rates in humans.