Recently the news spread that elephants have 20-times the amount of a cancer suppressing gene, called p53. Elephants have about 100 times the cells of humans, but their cancer rate is only 5% in a lifetime, which lasts 50 to 70 years.

Humans on the other hand have a cancer rate of between 11% and 25% in a lifetime. A research team at Huntsman Cancer Institute (HCI) at the University of Utah and Arizona State University also included researchers from the Ringling Bros. Center for Elephant Conservation, and they may have found the answer. They found that elephants have 40 copies (20 pairs of alleles) of a gene that codes for p53, a well-defined tumor suppressor. Humans have only two copies; p53 is a protein that is well known for its cancer-inhibiting properties.

In the following I like to review the research findings regarding the p53 protein. But be warned! Some of this is highly technical as there is no practical application for cancer patients yet. But it gives you more insight how science works, and how many steps are needed from a discovery to a cure.

It is actively involved in fighting cancer cells and in making cancer cells die off. If there are insufficiencies in p53 function, this leads to cancer formation. The TP53 gene is located on chromosome 17 at position 13.1.

As this reference explains there are many human cancers where p53 has been involved.

Breast cancer: In breast cancer an increased risk was associated with variations of the TP53 gene that codes for tumor protein p53. Non-inherited mutations are more common than inherited ones; they are found in 20 to 40% of all breast cancers.

Most of the mutations in bladder cancer involve changes of single amino acids in p53. The modified protein cannot bind to DNA, which prevents it from regulating cell growth and cell division. The result is that DNA damage accumulates in cells; this allows them to divide and grow in an uncontrolled fashion forming cancerous tumors.

About half of ovarian tumors have spontaneous somatic TP53 gene mutations. This results in a defective p53 protein leading to less control over cell division and cell growth.

Nearly half of all head and neck squamous cell carcinomas have somatic mutations of the TP53 gene. This type of cancer occurs in the moist lining of the mouth, nose and throat. Most of these gene mutations involve only one amino acid in the p53 protein impairing its function. This leads to a build-up of damaged DNA in cells, which divide uncontrollably and cause a tumor.

Li-Fraumeni syndrome (LFS) is a cancer syndrome that is inherited in humans where mutations occur only in the TP53 gene. At least 140 mutations of this gene have been identified so far and most of them involve only one amino acid that is different causing multiple cancers in children and young adults. The amino acid changes affect mostly the part of the p53 protein that is involved in binding to DNA. Other mutations lead to deletions of small amounts of DNA from the gene. The altered protein is unable to trigger cell death (apoptosis) in cells that accumulate mutated DNA. Other changes lead to an inability to regulate cell growth and cell division.

P53 in other species

In mice a very similar cellular tumor antigen p53 has been detected that has similar functions as in the human: it functions as a tumor suppressor; it can cause apoptosis (cell death) in cells that contain mutated DNA and is involved in several other processes affecting cell growth and cell division as explained in this link.

Out of 59 dogs with the bone tumor osteosarcoma there were 24 dogs (40.7%) with a p53 related mutations. In 74% of these dogs there were point mutations. Dogs with mutated p53 osteosarcomas had significantly shorter survival times; other factors of poor survival were elevated serum alkaline phosphatase and a poor tumor grade.

In cats mutations of the p53 protein are involved in a variety of tumors: lymphomas, breast tumors, and fibrosarcomas.

Various cancer rates in different species: the rock hyrax (a type of groundhog) has a cancer rate of 1%; the African wild dog, 8%; and in the lion, 2%. Out of 644 annotated elephant deaths there was a cancer rate of 3.11%; if you account for adequate details regarding the cause of death, a conservative cancer estimate is a rate of 4.81% in elephants. In contrast, humans have an estimated cancer mortality of between 11% and 25%.

The unknown territory of p53

Despite p53 having been one of the most investigate cancer-suppressing proteins, much is still not known. I am coming back to the research by Dr. Schiffman and colleagues, as this seems to be a refreshing new approach. Dr. Schiffman looked at the rate of apoptosis (cell death) among lymphocytes (immune cells) and fibroblasts (connective tissue cells) in elephants, healthy humans and patients with LFS. The cell samples were either exposed to low dose radiation or to low concentrations of doxorubicin, both known to cause DNA damage.

The apoptotic rate after exposure to radiation was 14.64% in elephants, 7.17% for healthy individuals and 2.71% for individuals with LFS.

Dr. Schiffman and colleagues repeated these experiments in Asian elephants of different ages and found the identical findings. Apoptosis (cell death) among lymphocytes and fibroblasts was increased following DNA damage and cell division in white blood cells was increased following low dose radiation exposure. Dr. Schiffman and colleagues also found that there is a lower threshold for DNA damage triggering p53-dependent apoptosis in elephants compared to humans. It appears that nature decided in the elephant to remove the damaged cells with mutated DNA through apoptosis rather than to repair DNA damage. 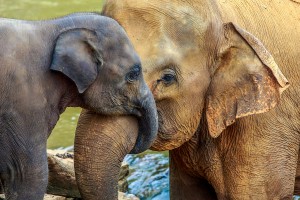 We do not yet have all the answers about p53, but the exciting research in elephants by Dr. Schiffman and colleagues has led to an entire new perspective. It is premature to conclude that humans should become like elephants. But elephants and lions can teach humans a lot about lower death rates. The species differences can perhaps one day lead to a cure of patients with Li-Fraumeni syndrome (LFS). Ways may be found to repair genetic weaknesses of the cancer suppressing gene p53. At this point this is a highly theoretical research project. It shows us, how research is delving into genetics in an attempt to solve the cancer problem. It gives us insight, how research works by examining several species to get closer to the truth. We know one common denominator, which is the gene p53. It is obvious how far it is to get from this research fact to finding a way to cure cancer. At this time we are not the beneficiaries, as the solution will be years away. It is future music!

In the meantime we have to stick to known facts: we can avoid overexposure to UV light to prevent skin cancer, stop smoking to avoid lung cancer, avoid excessive alcohol intake and avoid the consumption of charred, barbecued meat to prevent pancreatic and other cancers. This will reduce exposure to carcinogens and lessen damage to our DNA, which is known to prevent cancer.