What triggers or worsens inflammation?

Refined sugars and processed food can trigger inflammation or make existing inflammation worse. When food is fried in cooking oil that has been repeatedly heated, free radicals are forming, that can cause inflammation. However, exposure to stress and smoking also produce free radicals in the body.

What an anti-inflammatory diet is­­­­­

Vegetables and fruit contain a lot of antioxidants, which neutralize free radicals and prevent cell damage. Fiber also works as an anti-inflammatory. Omega-3 fatty acids are anti-inflammatory in nature. They keep oils in the cell membranes stable: Eicosapentaenoic acid (EPA) and docosahexaenoic acid (DHA) are omega-3 fatty acids derived from cold-water fatty fish, such as salmon, mackerel, herring, and sardines. Alpha-linolenic acid (ALA) is a healthy fatty acid, which occurs in plant oils, such as walnuts, chia seeds, and flaxseeds.

Despite a wide variation between all the 15 countries bordering the Mediterranean Sea, there are common characteristics: an abundance of vegetables and fruit, along with nuts and legumes. Seafoods and poultry are consumed in moderation, red meat rarely. The anti-inflammatory diet can contain some cheese and natural yogurt. Cereals are largely whole grain. Olive oil is the principal fat source, and – depending on the region- people eat fish and seafood.

Researchers originally developed this diet to help patients lower their high blood pressure. DASH is an acronym for “Dietary Approaches to Stopping Hypertension.” The DASH diet contains less sodium than the typical North American diet and is rich in vegetables, fruit and whole grains. It includes low fat or fat-free dairy products. It also contains fish, poultry, nuts and beans. There are limits for full fat dairy products and fatty meats.

What conditions improve with an anti-inflammatory diet?

Foods to eat on an anti-inflammatory diet

An anti-inflammatory diet should be nutrient rich, contain several antioxidants and also healthy fats. This means that the diet should be a combination of oily fish, such as canned tuna and wild-caught salmon. It contains vegetables, including kale, spinach, and broccoli. It also should contain fruit, such as blueberries, blackberries, strawberries, and cherries. In addition, beans, nuts and seeds, olives and olive oil, as well as fiber should be part of this diet. Other scientists pointed out that raw or moderately cooked vegetables are also useful in an anti-inflammatory diet, as are legumes, such as lentils or beans. Spices like ginger and turmeric, probiotics and prebiotics, tea and some herbs are also beneficial. A study showed that such an anti-inflammatory diet is useful treating rheumatoid arthritis.

Foods to avoid with an anti-inflammatory diet

The list of foods to avoid includes processed foods, foods with added sugar or salt and unhealthful oils. Avoid processed carbs, which are present in white bread, white pasta, and many baked goods. It is essential to avoid processed snack foods, such as chips and crackers. Cakes, cookies, candy, and ice cream are also on the list of undesirables. Excess alcohol is a cell and nerve poison, so remove it. In addition, people may find it beneficial to limit their intake of gluten, which contributes to inflammation of the gut. 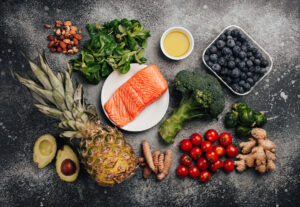 The approach is actually quite simple: Fill your shopping basket with a colorful array of vegetables, stick with whole and unprocessed foods, avoid the snack- and convenience products that you have met on TV commercials, and enjoy the adventure of preparing and eating foods that are the favourites in the Mediterranean.