Zinc belongs to the essential minerals, as it participates in human growth and development. Zinc is  important during a normal pregnancy, for growth in children and for adolescents. We may forget about its importance during adulthood. But all along zinc plays a role in DNA synthesis and protein synthesis. It even can limit inflammation, oxidative stress and protects us from cardiovascular disease.

As we get older and reach late adulthood, the ability of zinc to help with the repair of wear and tear of broken DNA becomes crucial for the prevention of some cancers.

Researchers set up the following experiment at the UCSF Benioff Children’s Hospital Oakland Research Institute (CHORI) in California. For 6 weeks 18 men ate a diet low in daily zinc. The participants received a rice diet with only 6 mg of zinc per day for 2 weeks. For the remaining 4 weeks they received 10 mg of zinc in their diet. Researchers measured zinc metabolic indicators, oxidative stress, DNA damage and DNA inflammation before and after the diet.

Based on these guidelines the first 2 weeks of the described experiment created a mild zinc deficiency in the participants. During the first part of the experiment there were increased DNA breaks in the white blood cells. There was a reduction of immune system indicators and an increase of oxidative stress. During the remainder of the experiment zinc intake was raised by 4 mg to 10 mg per day. The researchers could verify that DNA breaks in the white blood cells and the oxidative stress markers were lower. The immune system indicators showed an increase. They concluded that a small increase of only 4 mg of zinc per day by consuming “zinc-fortified crops” would make  a measurable difference. I will comment regarding this below. 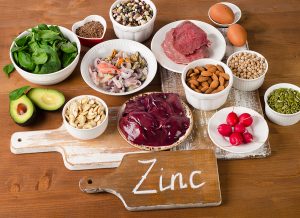 This experiment was interesting, as it shows how important zinc is in our diet. However, I have some issues with “zinc-fortified crops”. Keep in mind that two of the 10 authors have a conflict of interest: they were inventors of zinc-fortified crops! Personally I prefer to take a chelated zinc supplement of 30 mg once per day. This way I have the assurance to have enough zinc on board. There is no risk of “overdosing” with these small amounts. The body will excrete what is redundant.

When you get older it is particularly important to take a zinc supplement. You do not want your immune system to weaken. You don’t want reduced protein synthesis or accumulating damaged DNA in your cells anywhere, as damaged DNA could be the first step to developing cancer. Another important mineral is magnesium, which I have reviewed in a separate blog.

Have a balanced diet with enough vitamins and minerals. Exercise regularly and get enough sleep. With this you are on the pathway to continuing good health.