In a new study it is stressed that cutting salt prevents heart disease. Often high blood pressure has an association with eating too much salty food. But this may not have to be necessarily from salt you added to your food. Eating too much processed food can also make you exceed your daily salt allowance. This can increase your blood pressure as well, which in turn can cause heart attacks, heart failure, strokes and kidney disease.

A comprehensive review has noticed that a reduction in salt intake reduces the risk of heart disease, strokes and kidney disease significantly. In addition, you cutting out added salt can even avoid dementia from preventing small vessel disease.

Who is at risk for developing high blood pressure?

A February 2020 study in the Journal of the American College of Cardiology looked at 200 published studies and the impact of salt on the bacteria in our gut, on the small blood vessels and our immune system.

It is the small blood vessel damage that can lead to kidney disease and Alzheimer’s disease. Not to cut down your salt consumption can also lead to heart attacks and strokes.

The British Medical Journal published an article in January 2020 that summarized the findings of 133 original research papers regarding the effect of reducing salt intake.

The new guidelines for a normal blood pressure are 120/80 or less. This link recommends the DASH diet, if the blood pressure is too high. The American Heart Association recommends to restrict your salt intake to less than 2300 mg per day. 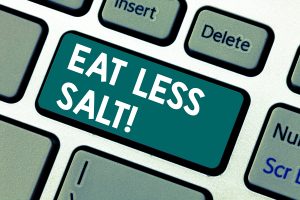