US and Canadian researchers found that cooking food affects the gut microbiome. The researchers analyzed the diversity and composition of the gut microbiome after feeding mice cooked meat versus raw meat. They found to their surprise that there was no difference in the gut biome following either raw meat or cooked meat. However, they now compared the gut flora of mice following digestion of raw or sweet potatoes. There was a poorer bacterial diversity following raw sweet potatoes. The researchers found more Bacteroidetes bacteria with cooked sweet potatoes in the gut of mice.

Subsequently the researchers also fed white potatoes, beets, carrots, corn, and peas to mice. These foods had various degrees of starchiness and digestibility.They found the same difference between cooked and raw potatoes as in the experiments with sweet potatoes. With respect to the other vegetables there was no difference, whether they were cooked or raw.

The researchers repeated this experiment with human subjects and found the same result.

“Our lab and others have studied how different kinds of diet, such as vegetarian versus meat-based diets, impact the microbiome,” said the senior author of the new study, Peter Turnbaugh, Ph.D. who is an associate professor at the University of California, San Francisco.

He added: “We were surprised to discover that no one had studied the fundamental question of how cooking itself alters the composition of the microbial ecosystems in our guts.”

Potatoes have a high percentage of low-digestibility starch

The researchers found that potatoes have a high percentage of low-digestibility starch. But heat can change the quality of the potato and make it digestible.

The researchers hired 3 women subjects and 2 males between the ages of 24 and 40. Again with humans there was less diversity in the gut biome following meals with raw food versus cooked food.

But Dr. Turnbaugh said that he plans much larger experiments with humans to study the gut biome. 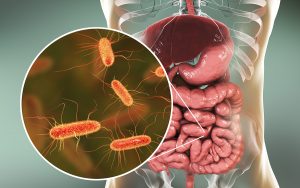 A new type of research is emerging: microbiome analysis of the gut bacteria. The researchers hope to understand why a raw potato is more difficult to digest than a cooked potato. Cooked beets, carrots, corn, and peas showed no difference in the microbiota of the gut in comparison to raw consumption. The researchers hope to be able to clarify why some foods need cooking and others can easily be digested when raw. They hope to start larger clinical trials with more subjects soon.