News came out that the EPA (Environmental Protective Agency) did multiple measurements in drinking water samples throughout the US. This happened between 2012 and now and they found cancer producing chromium-6 in drinking water.

Hexavalent chromium is a ubiquitous metal in the industry. 136,000 tons were produced in 1985 in the US. It is used as chromate pigments in dyes, inks, and plastics. It also has anti corrosive qualities. Chromium-6 is used for protective metal coatings. Chromium-6 is formed when welding stainless steel. But it is also released when chromium metal is melted. Workers exposed to chromate products including welding and grinding developed lung cancer. Chromium-6 was discovered in imported leather goods and shoes from China. There is strong animal experiment evidence that contaminated drinking water can cause gastrointestinal tumors.

Drinking water measured as too high in 2/3 of the US States. One of the problems is that the EPA has not set any national limits as toxic levels. California utilized the latest safety research to impose new safety limits July 1, 2014.  The drinking water limit in California was set at 0.01 mg/L of chromium-6 or less. But other states and the federal guidelines by the EPA have not yet set safety limits. Maybe in the future this will happen.

Finally, the European Union drinking water standard was set at 0.05 mg/liter for chromium-6.

Drinking water can be analyzed to see what the water concentration of chromium-6 is in a sample.

If the concentration of chromium-6 is higher than 0.01 mg/L, filter systems can remove chromium-6. Another solution is to install a reverse osmosis system that provides drinking water. 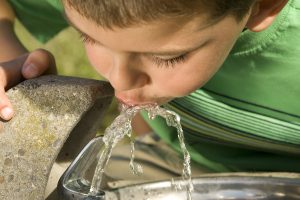 Two third of the US States have contaminated drinking water. They contain the carcinogen chromium-6. Technology exists to remove this before it reaches the consumer. The EPA has been slow to react to these facts. But it is especially relevant that consumers can take action and protect themselves and their families. They can install filter systems and reverse osmosis in those regions where the municipalities have not yet been proactive. As a result the chromium-6 concentration will be acceptable. Call your political representative, if you live in an area that has chromium-6 levels that are above the California limit of 0.01 mg/L. This is the limit under which no cancer can be found over a lifetime. Therefore, anything higher than that is simply not acceptable.