Originally researchers published a 15-year follow-up study regarding these two groups of firefighters.

The Medscape publication describes the data regarding a 20-year follow-up. Of the original FDNY firefighters 97.6% survived 20 years. This is more than 93%, which was the survival of the control firefighters.

Three cancers stood out that were significantly higher than in the normal population or the control firefighter group.

Prostate cancer: about 1.7-fold compared to the male average

Thyroid cancer: this cancer was about 2.3-fold compared to the average population

During 9/11 when the World Trade Center buildings collapsed there were noxious gases released to which the firefighters were exposed. The smoke contained debris, fumes, particulate matter. But the smoke of the collapsing buildings also contained carcinogens like benzene, asbestos, arsenic, phthalate esters, sulfuric acid and pesticides.

Could the three cancers have developed from exposure to fumes at 9/11?

With respect to prostate cancer, we know that the aging process can cause this cancer. But the New York fire fighters were compared to a male control group of the same age group. The risk was 1.7-fold higher to come down with this cancer. This suggests that the carcinogens of the smoke from the fires were the cause of their prostate cancers.

Similarly, the melanomas developed from exposure of the firefighters to the smoke from the collapsing World Trade Center buildings. It is conceivable that direct contact of the skin of the fire fighters with carcinogens caused melanomas later. 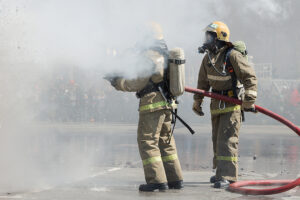 We all vividly remember the images from 9/11 when the World Trade Center buildings collapsed in 2001. Firefighters are now 20 years older. There are three types of cancers that developed in them more often, prostate cancers, melanomas and thyroid cancers. Firefighters from the New York Fire Department have excellent medical plans that allow them to get an early diagnosis and treatment. They also have free access to CT scans. 97.6% of the firefighters fighting the World Trade Center survived 20 years. In the same time only 93% of a control group of firefighters survived, as they did not have the same type of medical surveillance.

With regard to cancers its early detection and early therapy is essential to achieve good long-term survival rates.